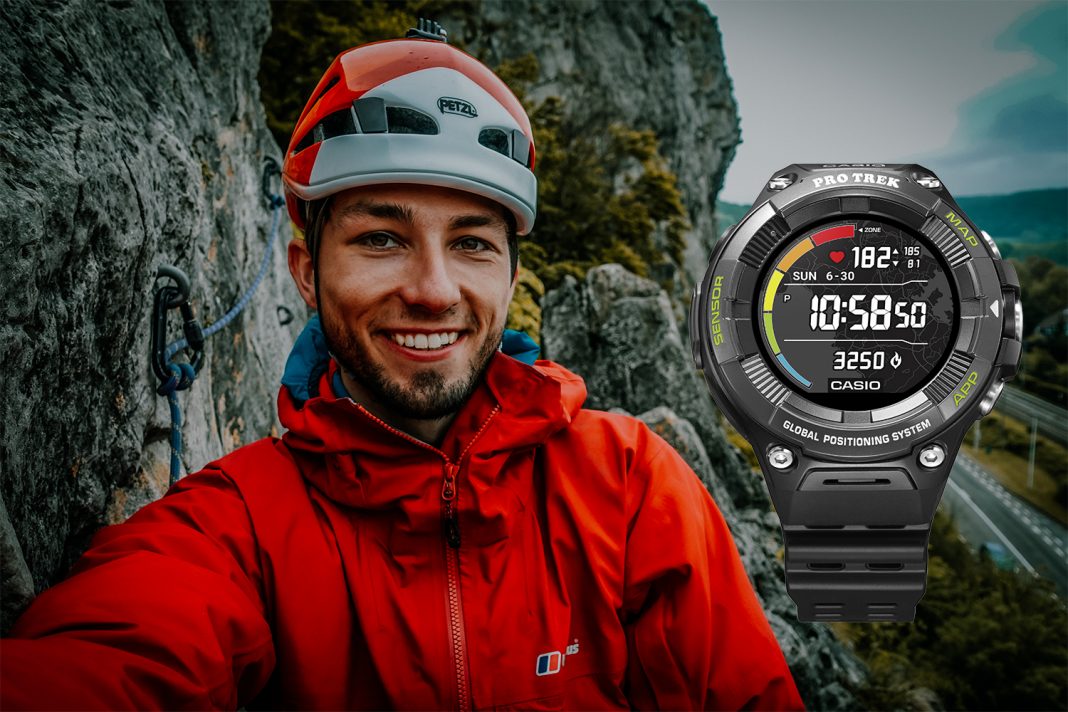 Casio expanded its range of Pro Trek Smartwatches with the WSD-F21HR at the end of last year. The brand new model is water-resistant up to fifty meters, and the construction even meets the military standards of the United States. Ideal for mountain climbing, outdoor trekking and even diving. Jeffrey Witter ventured into a review in recent months.

With its 61.7 mm x 57.7 mm x 16.8 mm, the Casio WSD-F21HR is not a compact smartwatch. However, because the wristband is easily adjustable, it fits even on the smallest wrist. Once used to the size, the watch fits nicely on the wrist.

At first, the Casio looks like a normal outdoor watch, a robust appearance with easy-to-use buttons on the side. In the smart stand, there are different options for a timepiece. From camouflage print where you can see the height, location etc. to a minimalist design, there are many timepieces to download in the built-in Google Play store. This allows everyone to set the watch to their taste.

At first, I had to get used to the watch. The manual is concise and does not describe all the functions. It, therefore, took about a week before I really understood the watch. I used the watch while climbing in the Belgian Ardennes while running, cycling, walking. Even though it is a large watch, he has not been in the way for a moment during these activities. Once you are familiar with the menu, an activity started, paused and saved. The screen of the watch is generally clearly visible. When the watch is in economy mode, it is sometimes necessary to turn the watch a little to be able to read the screen properly.

The charging cable is connected to the watch by means of a magnet, due to the slightest movement of the cable the plug already falls out of the watch. This happened several times while I tried to charge the watch at home. If you want to charge your watch on the go, this can cause a lot of annoyance.

Another point is the amount of information that the apps store, I would like to have been able to view more data and export it to my PC. Now you can only export the route.

The indicated battery life of Casio appears to be correct in practice. From a few months in the economical mode to 20 hours in the tracking mode. For a smartwatch, it lasts a surprisingly long time, mainly when you use it in daily life and do not use the GPS consistently.

There are several apps on the watch; the Google Fit app is my favourite. This app shows your heart rate, speed, distance and stores this on the watch, along with a route of the mileage travelled. The other fitness apps, which focus on walking, running, cycling, fishing and skiing, also show a lot of information during the activity. Still, this information cannot be read back when the activity is completed. Other apps, such as the Strava app, do not add much if you have the free version of Strava on your phone. You cannot link the heart rate data to your Strava account.

The advantage that the system runs on Google software is that new apps are continually being developed, so there were no Google Maps available in the beginning, and now it is. So you can use your watch as navigation!

The selling price of the watch is 500 euros, for this amount or less many other smart/sport watches have the same functionality. The advantage of this watch is its robust construction and good battery life. It remains, of course, a luxury product, it varies per person what you would like to spend on a gadget. For me, 500 euros is just a little too expensive. I would not want to spend more than 350 euros on a sports watch, but that is of course purely personal.

I have since become attached to the watch and wear it daily. A smartwatch is a luxury product, with a sports watch and a phone you have almost the same functions for a fraction of the price. And yet I am thrilled with the watch, being able to read Whatsapp messages on your watch is useful when you are exercising. You don’t have to grab your phone while cycling, you need to take a pulse and you are up to date.

At first, I didn’t think I needed a smartwatch, but during the test period, I found out that having it is very easy. Who is this watch meant for? I think this watch is a great asset for all adventurers and multisporters who, in addition to tracking an activity, also want the functionality of a smartwatch in a sturdy case.

What would I like to see in the next version of this watch?

More apps, with the ability to quickly share your data via social media. Make phone calls through the watch; you can now leave messages but not make calls. The charging cable can use a clip so that the watch can also be charged on the go.