Top Swiss mountaineer Dani Arnold sets a new milestone at the beginning of the season on the Matterhorn, climbing the North Face in 1 hour and 46 minutes, and outperforming Ueli Steck’s previous record by 10 minutes.

The North Face of the Matterhorn 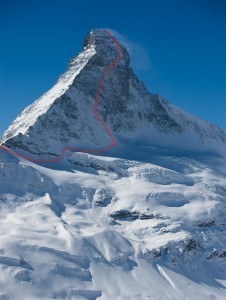 This will be the Matterhorn’s summer. Zermatt is celebrating its own world-renowned mountain. 150 years ago, on 14 July 1865, Edward Whymper and his rope team reached the summit that had long been deemed unclimbable. Then it seemed impossible. Now it’s quite common, among other reasons thanks to better equipment. The idea of what is and is not possible on a mountain has changed and continues to do so.

Top mountaineer Dani Arnold from Uri in Switzerland has already pushed the limits of what is possible in various high-speed ascents of difficult routes. This week, he set a new record: he climbed the Matterhorn North Face in only 1 hour and 46 minutes. He used the classic route of the North Face first ascenders (Schmid Route). Arnold undercut the previous record by Ueli Steck from 2009 by ten minutes.