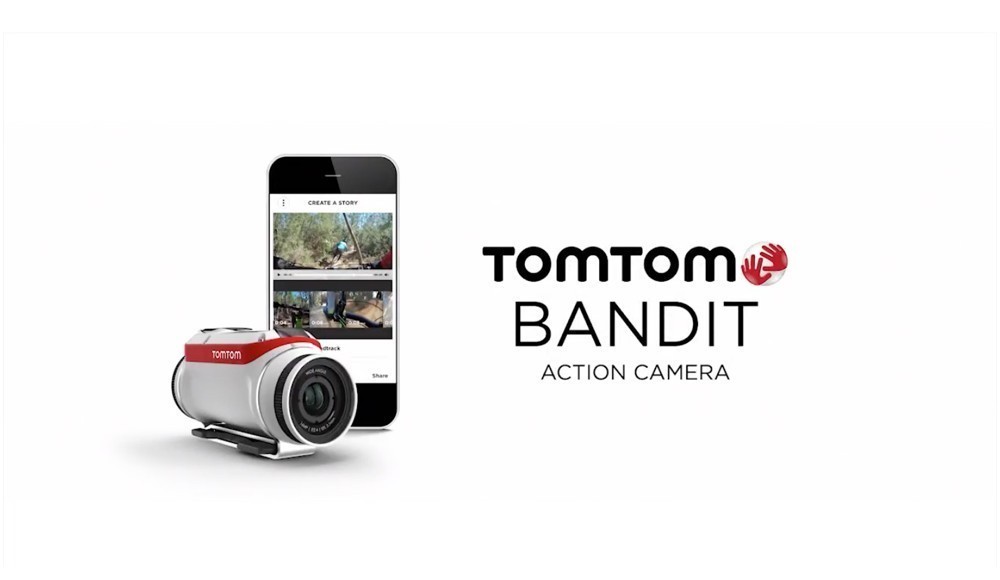 For a long time TomTom was world famous in Holland for its ground breaking navigation equipement. The TomTom Screens could be seen in almost every car and were coveted by every petty criminal. Gradually however, with the advent of navigation apps in smartphones TomTom lost its market share and seemed destined for bankruptcy. However the company is reinventing itself, (respect for that) introducing sportswatches in the past year, and now introducing a new Action Cam, the Bandit. As soon as I read the headline of the press release I had an immidiate association with Garmin, also a specialist in navigation equipement. Would TomTom also be using its expertise in GPS to enhance the experience of using and Acation cam and action video’s like Garmin has done? (Check out Video Review of Garmin Virb Elite and preview of Garmin Virb X and XE).

In one word, Yes. In a way. But that’s not the main USP they are pushing. I have found out that you can use graphic overlays to enrich your video, but they do not market this element at all. Which I find strange. Cause it is cool! So what choices has TomTom made in this product that will make it succeed? The words “editing” and “sharing”  are key to the marketing efforts surrounding the Bandit.

TomTom has focused on the editing of the video you want to have at the end of filming and being able to share it.

“We know that the biggest frustration people have with action cameras today is the time and effort it takes to edit,” says Corinne Vigreux, co-founder and managing director, TomTom Consumer. “With TomTom Bandit we’ve cut the editing time down from hours to minutes – all it takes is a shake!”

Now I’m not completely sure if the biggest frustration is editing, but it certainly takes a lot of time. The way TomTom has gone about this issue is make it possible to tag your highlights during the shooting of film and by using a smartphone app that tracks the video that is stored on the camera without having to download it to the phone. By shaking your phone (unnecessary but fun gimmick) the app automatically selects and edits the tagged highlights to a single video edit. The Camera has a built in “media-server” enabling this process. The question mark above my head is: “What do they do with music?” We’ve found out that there is no rights free music library included, but you can use music from your iphone. Beware of copyright infringement on music though. It can get your shared video blocked by Youtube and Facebook.

As far as the tagging is concerned it is interesting to see that TomTom does use GPS sensors, but

“to automatically find and tag exciting moments based on speed, altitude, G-force, acceleration and heart rate*. Highlights can also be tagged manually with a tagging button on the camera or the remote control*.”

The asterisk by the way refers to a byline that “an additional accessory is required”.

Then there’s the sharing. Obviously a really good idea, however I do have my doubts if this really is going to work like you would want it to. The reason is quite simple: High Quality video files are just really large files. Either you have to compress the video’s to smaller resolutions which would be ok for mobile viewing but would look bad on desktop, or you need a really great upload speed to share your high quality video. And that, I think would be exactly the problem with many action sports: taking place in mountains, on water, not always with good cell coverage.  So for this feature (which other action cam brands also offer through their own apps) you can be quite dependent on circumstances beyond your control.

As for the specs I am happy to say they are ook: 1080 at 60fps is the minimum you would be expecting for new camera’s coming on the market. The 4k at 15fps is nice but useless but the rest of the set-up is fine. Although we won’t know for sure until we actually use it. (check out our Action Cam Gear Guide section if you want to know what these specs mean).

As far as accessories is concerned TomTom has smartly outfitted the camera with a GoPro adapter, but also has it’s own lone of accessories including mounting pads, extra large board pad, a pole a writs band, bar clamp and tripod adapter.

In conclusion, its looks like a cool camera, has the basics right, and we are very interested in finding out if the editing and sharing is really as easy as it is marketed. To be continued!

By guest blogger: Michael Geesink Light but very light. The lightest trail shoes I have ever worn. That's at the expense...
Read
Review

This review was written by guest blogger and trail runner André Korpelshoek The first introduction to Salomon was a special one! The...
Read

At Gearlimits we want to know everything about outdoor products and get to know the ideas and the people behind the brands. Jeffry is...