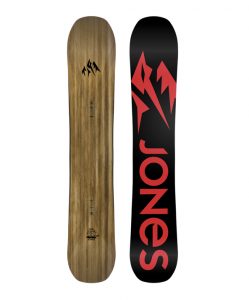 Jeremy Jones is one of the legends of snowboarding. One of the great big mountain riders who has kept pushing (quite literally) the boundaries of how far, how high and where you can go with a snowboard. He has pioneered bug mountain riding and splitboarding and has been producing freeride and splitboards from the season 2013/2104.

Just recently a film about his life was released: “A Life of Glide”.

The Flagship, as the name suggests is the signature freeride board of the brand and a board that they have been working on ever since the brand launched. According to Jones the Flagship will charge through anything.

The Promise of the Flagship

A boards’ profile determines for a large part how the board will ride. The Jones Flagship has camber between the bindings, for power, grip and pop, and rocker towards the tip and tail, with more of it on the tip, for better float in powder. In effect, the board is slightly directional and the stance a bit set back. All characteristics that make it fit the demands of riding in terrain.

Charging means having grip at all times, being stable at high speeds and being stiff enough to plow through anything. And once again the Flagship checks those boxes. Beside the natural effect of a camber with a very long effective edge (that is where the edge will catch in the snow while you turn) the “Traction Tech” as Jones calls it, improves edge grip by. Simulating the effect of a serrated knife, there are extra contact points along that effective edge that will bite into the snow even more.

Being gear nerds, we could go on about all the smart stuff that’s packed into the board, the “spoonish” bevel on tip and tail for a bit more float and less catch, but we’ll leave that up to Jones. What is more important to know is if all that smart stuff actually delivers on the mountain.

[vc_message]Are you a bit confused by all the terminology flying around? Check out or Snowboard GearGuide for some further explanation.[/vc_message] 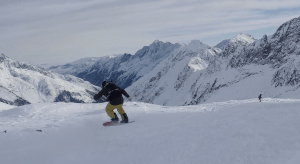 Even though Seb is not a very big or heavy guy, he is a very powerful rider, a real big mountain guy who really likes to charge. Everything. With all his experience he recognized the qualities of the board before even riding it, and when he did ride it, was not disappointed. It delivered on the promise of being a charger, or a “classic gun” as Seb put it. You have to ride it hard, with power, and it will repay you with stability, grip and pop. And everything with confidence. To Seb the board is really at expert level, though an intermediate rider that knows how to turn and can really run the board, the Flagship gave ample space to grow and improve your riding. It will demand you really ride it. 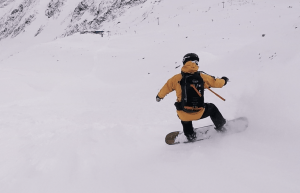 Having heard Seb’s judgment I was a bit apprehensive, I am not an expert and am nowhere near as experienced as Seb. But like Seb, I do like to charge. I am not that technical a rider (yet), a bit taller and heavier. I have noticed that I will reach the limits of what a more flexible or more rocker-like board allows me to put into it, a bit earlier than lighter and/or more technical riders. Many were the times during our 3 days of boarding that I flew down the slope only to lose it in a cloud of snow; Seb’s laughter following me as I ass-slide down the slope until I grip again.

With the Flagship, there was so much grip, so much control and stability that I could put everything I had into it and really feel the trust I could have in the board. It held me, and then some. With this board, I had the feeling I could reach the full potential of what I can do on a board. I could straight line it, but also throw it quite easily edge to edge on narrower bits. I just loved this board.

The Flagship delivers on its promise. It is a charger, a classic gun, it will take you where you want to go, and fast. It’s amazing at speed and still agile enough. You can point it or throw it around. But you do need the power and technique to do so.