We’ve had the opportunity to ride a number of Cube bikes the past two years and I have to be honest, I think this might be the Cube bike I had the most fun on. The Cube Nutrail Hybrid is a big black and green monster, a tank, a very agile tank that will chew up the trail and spit it out.

I rode the Nutrail primarily on trails in the Netherlands, where there are very few vertical meters to be had. So the trail builders have worked to make the most of the little hilly thingies we do have, resulting in windy trails, short burst, sharp turns, explosive little climbs and short descents. A loamy forest floor interchanged with dry sandy stretches. Really much more of XC trails than anything else. I did one short ride in Austria’s Stubaital: climbing over some asphalt and up a steep fire road, and descending by a steep, narrow and slippery hiking trail. I did meet up with some rocky patches but not that much. 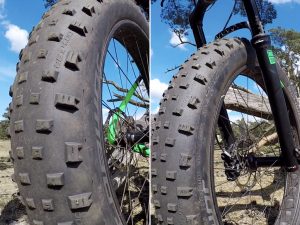 Ok, so the bike: this bike will get you noticed. Riding through town heads turn, eyebrows are raised, and especially young kids cannot help but throw out a “wow, look at those tires!”. 26 by 4 inches wide makes for a damn impressive tyre. I have to say that the tread on the Schwalbe Jumbo Jim, Kevlar, 4.0″ of the test bike I rode, especially the back tire, were very much worn. and yet, they gripped like maniacs. Especially in the tight fast corners of the trail, you could really lean into the turns without the bike feeling any less stable.

Cause that what it is, it is such a stable ride, obviously, the track of the tire is so much wider than a regular bike. And with those tires you can just charge through just about anything, certainly sand on the trail, you’ll fly over that stuff, but mud as well, no problems. But the power of those tires was really obvious in how you can just smash through branches and over roots, and explode off of little tree stumps for some air. In Stubai I met some rocks: the tires did not blink. 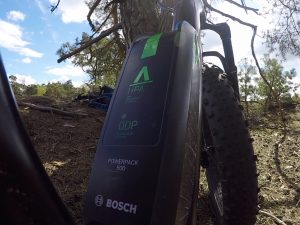 That’s what the “fat” in the bike brings to the table. And it just ties into the e-bike part of the Nutrail Hybrid equation. The power of the Bosch Drive Unit just adds so much to the total package of the bike. I was able to power through the Dutch trails with 10 kph faster on average than with a normal bike (I’m not a great XC-er). And life just get’s better when you are going faster, doesn’t it? So did my experience on the trail, turns were cooler, more of a carving sensation akin to snowboarding as you pushed the bike through turns, jumping off of those tree stumps I mentioned earlier, throwing the bike around between the trees. All added up to just more fun. 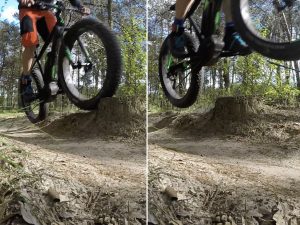 The engine also works wonders in the mountains, especially, if like me, you’re not a huge fan of climbing. It will just fly you up the mountain: but take into account, the steeper you go, the quicker you will deplete the battery. The range you can still ride will drop almost exponentially if you set the power setting to the maximum turbo.

The bike is quite heavy, and regardless of it agility in the forest, on the mountain on really steep section it isn’t really that good. To be honest the bike hasn’t really been built for alpine circumstances; but that is one of its limits. Wheelies, endo’s, stoppies and other parking-lot skills are quite hard with this bike. The agility is not limitless.

The bike is in effect a hardtail, but if you don’t max out the pressure in the tire, you will have some air suspension action making your ride a bit smoother. The front fork sports a Rock Shox Bluto 100 mm travel suspension, which is fine for the XC work I did. 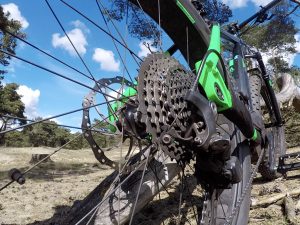 The Shimano XT M8000 1×11 group set does it’s work quite well. What will feel different from a regular bike is that the tension on the chain will be constant throughout because the slightest pedalling action will put power from the engine on the chain. Normally you would let off on the pedals for the slightest moment as you shift (certainly uphill), but in this case the power of the engine continues a bit after you stop pedalling, so the momentum and timing of shifting gears needs to be a bit different. 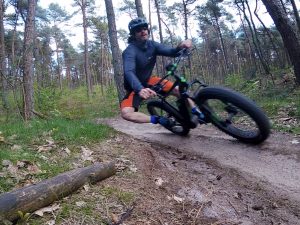 So in conclusion, as I said when reviewing the Cube Stereo Nutrail Hybrid, e-biking is just different from regular riding. The game changes a bit, it adds fun in certain areas and detracts a bit in others.

But in the end the bike made me smile every time I got onto it. It might write that up to loving mountain biking so much, in any shape or form, but the cube Nutrail Hybrid certainly is very much to blame for my smiles.

And I was finally the fastest on the XC trails near my home: a few ambitious bikers tried to keep up with me, but the Nutrail really left them gasping for air and eating my dust. The devil in me was quite amused at that!