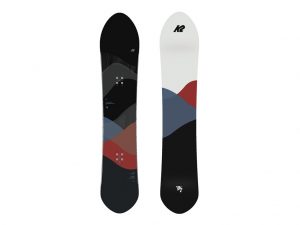 One of the fifteen boards we road to review in Stubai in the beginning of November was the K2 Eight Seven. It’s a board that our two experienced test riders Dees Hetzenauer en Seb Jam both rode. Two different riders, with a different take on the board. Interesting right?

K2 has been working with “volume shifting” principle on a few boards now. The most prominent examples of this that we have ridden were the K2 Cool Bean and Party Platter. The idea is that length is not the only factor determining if a board is the right one for a certain weight and length, but that the length and width ration, resulting in a certain volume, is the principle thing.

If you look at float in powder I can see the point, and having ridden both the Cool Bean and the Party Platter I have to agree that there is merit in shifting volume. The idea is to pack more agility and playfulness into the board (the effect of shortening it) while providing enough volume underfoot. What I did notice with the earlier two boards is that stability at higher speeds is compromised. 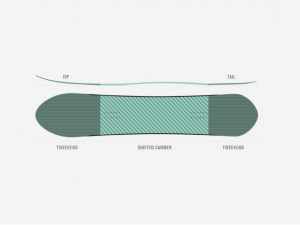 The above mentioned boards are different than from the Eighty Seven in the fact that they have flat profiles and the Eighty Seven doesn’t. It’s camber under the bindings with a bit of rocker (which K2 calls “tweekend”) towards the tip and tail. The tip is quite big and pointy, like a surfboard. And that is (according to K2, what this board is all about: “the surf vibe”. With a flex rating of 3 (on a scale of 1 to 10), a very light bamboo core and a directional camber profile. Unfortunately we did not ride the deep pow this board is made for. On the other hand, the snow on the pistes was really good, and the camber profile of the board did a lot towards enjoying that a lot. 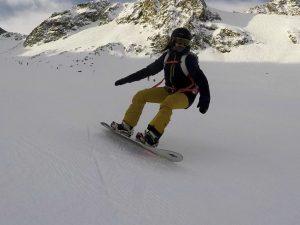 Dees is 175cm and 66 kilograms and the K2 really fitted her riding style well. Her experience was with the board really being able to power through anything she encountered, on and off-piste. She could really charge on the board, being lighter and a less powerful rider, the K2 (not a specific women’s board) really was confidence inspiring. She noticed that at lower speeds you really had to power through the turns. So you do need some experience to ride this board its is fullest. 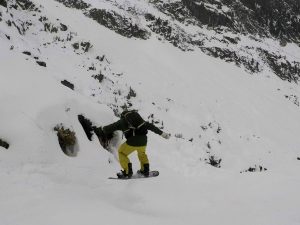 Seb is about 180 and around 80 kilo’s. A powerful big mountain rider who really pushes a board to its limits. He was really struck by the lightness and playfulness of the board. It was great to jump around on it, skip between moguls and he like how the board really turned quite easily. He did think that the board would be too light for heavier or larger riders. 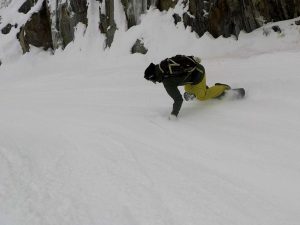 The Eighty Seven in our experience is a board with various faces and hard to peg down or really rate along one line. For lighter riders it is a charger, for heavier more powerful riders it shows it’s agility and playfulness.

All in all both Seb en Dees had a great time on the board the one charging and the other playing around.

It goes to show that experience on a board can be really different, depending on how you ride and what your own volume is ;-). We can conclude that the K2 Eighty Seven brings the goods in various ways!