Search
Home Review Video review: Ride War Pig Snowboard 2018
[vc_message]If all the snowboard terminology is too much for you check out our Snowboard GearGuide.[/vc_message] 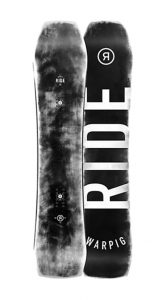 First of all the name: love it, the War Pig. Don’t know what it’s supposed to express exactly, but just an unlikely combination of short powerful words. After riding the board, we could venture a guess: the board is square, squat, aggressively shaped and has an almost “ugly” design, which makes it stand out and cool. And you have to ride it that way as well, with power and aggression. It’s not a board sophistication or subtle technical stuff.

Having said that, it takes more than a cool name to make a cool board of course. Both myself and Seb Jam, our resident former pro-riding destroyer of snowboards, rode the War Pig, and to be honest: after having to really get used to the board, we both had a blast on it.

The War Pig has a flat base, is short and quite wide, has a large rockered nose and a stump squarish tail. Sharp angles on both nose and tail. Do not let yourself be misled by the length of the board: Ride actually offers it in sizes X-Small, Small and Large (no medium). With a limited length, it still offers a good effective edge, and the width makes up for the shortness in stability and float. The sidecut radius is small, so that helps the board turn as well. 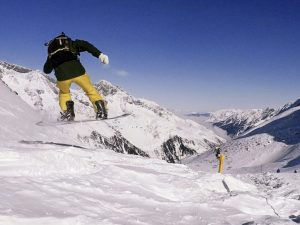 Seb had mixed feelings after the first laps: he reported hoe heavy the board was on the legs if you want to make smaller turns or carves, but that there was more comfort in longer more high-speed carving. Once you get the board on the edge with enough speed, the War Pig will hold the rail like a maniac. And even though the board has a flat base and not the longest effective edge, it will grip really well. It has a remarkable level of pop (which you need to make jumps) for a board with a flat base, and that is probably because of the carbon elements. In jumps that same flat base, the wide shape and impact plates in the board, provide a very good platform to land on. Seb’s conclusion: Tough board to ride, you need to power it. Not for beginners, not a freeride board, but one for freestyling parks and big kickers (aka big jumps). 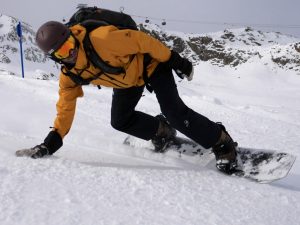 I am longer, heavier and a less experienced/good rider than Seb. My physique was pretty matched to the war pig and after getting used to the feel of the War Pig I had a lot of fun charging it. I totally agree with Seb on the grip that you feel when you are on the edge. Added to that, because it is so wide, you really can ram it onto that edge and you really feel you are standing high and dry on it. It’s not that nimble, but it will move when you tell it to move.

In conclusion, the look, the shape, the name and the characteristics are in line with each other. It’s not a board for the masses, but an acquired taste for people that really want to choose their own style.