Review: With the Mitsubishi Eclipse Cross through the Scottish Highlands 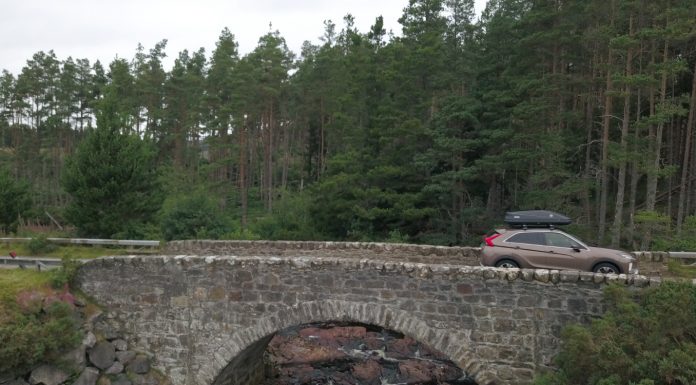 At GearLimits we look at cars with always camping, skiing, mountain biking, snowboarding and other outdoor activities in mind. So a car that is comfortable and still has room for all our stuff. We have to be able to enter the snow with it or cross a rough dirt road with it. And the eye wants something too. When I then spend money, I invest in a car that I like.

Last August I received the Mitsubishi Eclipse Cross 1.5 4WD Instyle CVT Cleartec for a fourteen-day road trip through Scotland. This should meet the above requirements. I drove about 4500 kilometres by car in those two weeks. That seems to be a respectable number of kilometres to accurately assess the vehicle.

Read my findings of the Mitsubishi Eclipse Cross below.

To start with the front. It features a distinctive Dynamic Shield grille with chrome accents that aim at a 3D effect. I am not a chrome lover, but I have to admit that I think the front is very cool.

The design of the Mitsubishi Eclipse Cross is made up of clean lines and chrome elements and with a recognisable – striking – split rear window. I had to get used to it first, both the look and the inside; more about this later.

The Mitsubishi Eclipse Cross is the latest fully developed in-house Mitsubishi car. Since 2016, the brand has been affiliated with the Renault-Nissan alliance. With the compact ASX and the spacious Outlander, a gap has been created in models. The intended objective of Mitsubishi with the Eclipse is to close that gap.

In the advertisements, Eclipse in colour Red Diamond Metallic is shown, but the Bronze Metallic colour that we brought with us literally came out well in Scotland.

I am delighted with the design and use of materials. Central to the dashboard is the head-up display that is easy to operate.

The driving position of the driver is pleasant. I am above average height and still have enough space. The seats of the front seats are somewhat on the short side, but I did not suffer from that during the longer journeys.

In the back, there is less headroom, which has to do with the sloping roofline. And there is considerably less legroom than in the front, but that can be solved by shifting the adjustable back seat. This can be pushed back 20 centimetres. That, in turn, has consequences for the luggage space. This is then reduced by 107 litres; from 447 to 340 litres. In my case, I had little trouble with that, since the Eclipse was equipped with a Thule Touring L roof box.

I had to get used to the split rear window, both regarding design and vision from the inside. Once you get used to the ‘beam’ that runs through your field of view when you look through the mirror, you will not even notice this.

The buttons and screens are bright and have a head-up display. Infotainment is controlled by a touchscreen and a well-designed trackpad controller in the centre console. Mirroring of Apple or Android phones is standard to increase user-friendliness.

Sporty comfort, that’s how I would describe the driving behaviour of the Mitsubishi Eclipse Cross. An enjoyable travel car that has a low noise level and smooth damping and suspension. Because we had a four-wheel drive version with us and had to drive off-road many times, mainly on gravel, the Active Yaw Control system was helpful, because the drive forces are sent backwards when the front wheels lose grip.

The Eclipse Cross comes with a 1.5-liter turbo petrol engine with 163 hp. A six-speed manual transmission is standard; we had access to a CVT machine. A particularly pleasant powertrain, with an engine that is powerful at both low and high rpm.

When quietly driving, the CVT ensures that the engine keeps a low speed while the car accelerates. As soon as you press the accelerator harder, like when you are on the motorway, the CVT behaves like an eight-speed automatic. It is very ‘smooth’ without strange noises and shocking movements.

With an average consumption of 1 to 13, with a large roof box, I am not dissatisfied.

The navigation system is missing. Ideal; you can arrange your own navigation. I have TomTom for years on my iPhone. This has many advantages, such as preventing fiddling with updates or unexpected subscription costs. Even if the car is out of date, navigation is always up-to-date.

Music is an essential thing for me. The Instyle version features a Rockford Fosgate premium audio system, developed in collaboration with Rockford Corporation. It must be said; the sound of the nine speakers around with DTS Neural Surround is sublime.

Furthermore, we had access to all possible features that Mitsubishi offers for the Eclipse Cross; the Instyle. Below the most important features for me:

On the long stretches – especially from England to Scotland – I was pleased with this. With radar detection, the system maintains a safe distance between the Mitsubishi and the vehicle in front. The ACC responds well; as soon as an unrepentant unexpectedly dives between you and the predecessor, the car is adequately in the anchors. Not pleasant, but safe.

This was a very welcome feature for me. Because I am used to driving on the right you want – especially the first days on the English roads – sometimes tend to leave the lane. Immediately there is a reaction with a warning in the form of a symbol on display and a sound signal.

Not new anymore, but very nice. The radar sensors in the rear bumper detect other vehicles in the blind spot. Both left and right. An indicator appears in the outside mirror when the BSW is active, and the flashing light is switched off. If the flashing light is switched on and the BSW detects a vehicle, you will be alerted by the indicator in the outside mirror and an audible signal. Also in England a handy feature.

The version that I had was the Instyle and therefore, even more, nice-to-haves compared to the standard version such as, leather upholstery, heated front and rear seats, steering, panoramic sunroof, adaptive cruise control and an audio system with nine speakers. The Instyle version is in the price list for 39,490 euros, always with CVT automatic. Our version was equipped with four-wheel drive. Here you pay 5,000 euros extra, but worth the money if it is up to me.

The Mitsubishi Eclipse Cross 1.5 Di-T 4WD Instyle is a comfortable, versatile crossover that seems distinctive enough to stand out in this full market. The gap between the ASX and the Outlander is well filled with the Eclipse Cross.