The Swiss professional alpinist and Mammut Pro Team athlete Stephan Siegrist realized an extraordinary balancing act in the summit region of Kilimanjaro. He set a world record by walking a highline at 5,700 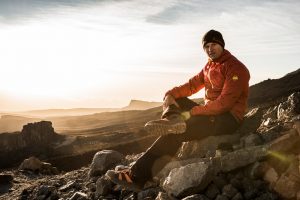 Sunday afternoon on Kilimanjaro: step by step someone walks – seemingly without effort – across the African sky on an exposed thin strip. The view of the steep rock and scree slopes and the swelling cloud layers far below does not quite fit a walk and yet the scene resonates with ease when Stephan Siegrist crosses a highline. The Swiss professional mountaineer has already crossed highlines on Alpine mountains such as the Matterhorn and Dufourspitze, adding to the amazing natural landscapes the surprising element of an almost playful balancing act. The highline, which is a good 20-m long and stretches between two rock towers on Kilimanjaro, is where Siegrist achieved a new record at 5,700 m above sea level: no-one has ever walked a highline at such a height. The previous world record was set in 2015 by Bence Kerekes of Hungary with a highline at 5,322 m above sea level in Ladakh, India. Siegrist has exceeded this by several hundred meters.

As an experienced alpinist, Siegrist is familiar with the challenges of height, but he could not predict how difficult it would be to keep his balance at 5,700 m above sea level. “Despite acclimatization, it was difficult to find my balance,” he says. “At this altitude, everything is slower – and that goes for balance too.” The low oxygen content of the air not only makes breathing difficult, but it also means that you feel dizzy more quickly. Placing one foot on the highline to begin the crossing was particularly difficult. “It was interesting to see how the highline responded to the slightest tension,” says Siegrist. “When I wasn’t completely relaxed, the webbing immediately trembled a bit.”

The pressure was also increased by the weather and a tight schedule. The strong gusts of wind were to be expected, but the news that it would snow on Kilimanjaro was a surprise. The chance of success under these conditions was limited to a small time window – an afternoon under the African sun, during which everything worked

(Outdoor) Store of the Future