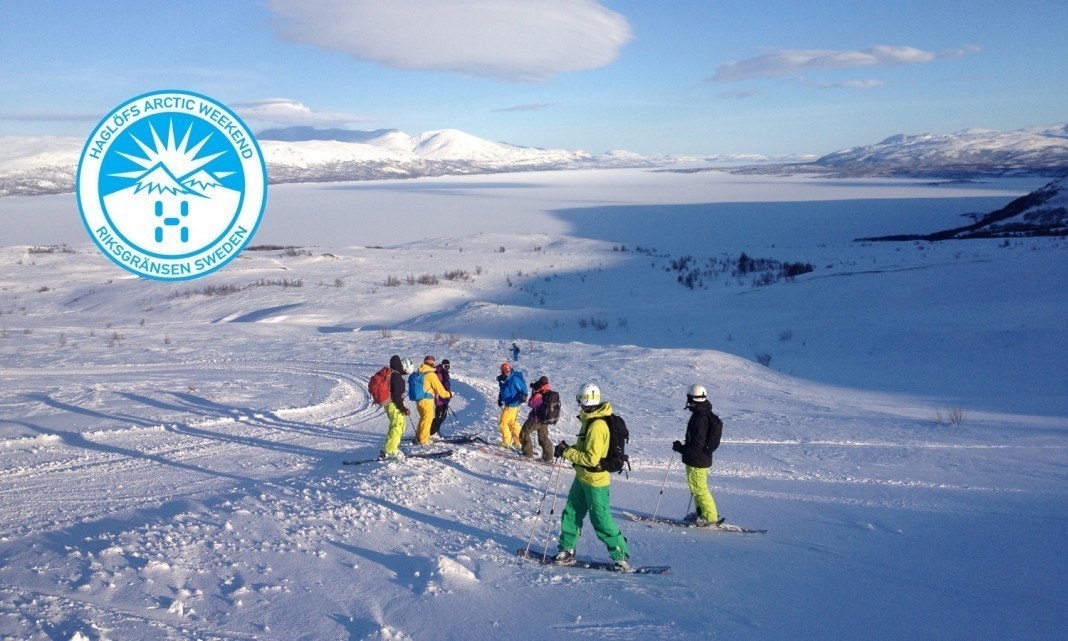 Riksgränsen isn’t the first name that comes to mind when thinking about wintersports in Europe. I hadn’t visited it nor the north of Sweden, so I was thrilled when GearLimits received the invitation to attend the Haglöfs Arctic Weekend and travel to this area above the Arctic Circle. I read up on anything I could find and soon found myself really looking forward to this wide, raw nature, sub zero temperatures and the company of like-minded wintersport enthousiasts and world class skiers and alpine climbers.

And obviously it would be a great opportunity to test gear. So I stuffed my board bag to bursting, hoping the bagage handling people wouldn’t be too critical at 5:00 o’clock in the morning (which was check-in time) about the weight. Besides my own snowboard and gear I would be using my bagage included:

We will be placing reviews in the near future of all these products. If you are curious how they held up, be sure to check in to gearlimits.com.

Not being of the “early bird catches the worm”-persuasion I hoisted myself out of bed with not a little difficulty to find myself at Amsterdam Schiphol airport at 5 am. For the first of three flights that would take us via Copenhagen and Stockholm to Kiruna. 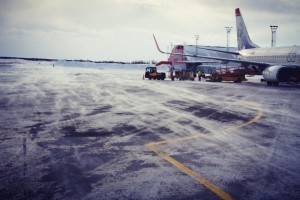 This town is known primarily for its world famous Icehotel, but what really caught my eye as we departed from the airport, was the huge ore mining operation which reaches up to 1,5 km under the earth and the tunnels of which burrow beneath the town, literally undermining it and causing wide-spread ground deformations. Due to which the whole city will have to be relocated.  So there you go.

The ore that is won in Kiruna is transported by rail to the Norwegian harbour town of Narvik and along this line heading north-west out of Kiruna you can find the Riksgränsen ski-resort which was our final destination. Not before a 5 hour bus ride -which should have taken no more than 2- due to a truck trying to ride the icy road side-ways, blocking it for  a few hours before it could be cleared.

At 8 pm we finally arrived at our hotel for the welcome get together of the Haglöfs organisation. Guides were introduced and the program explained after which we had the opportunity to register for our chosen activity. You could choose between ice climbing, snow kiting, free skiing and ski touring, amongst other things. Riding the crest of the wave of enthousiastic attendee’s racing to register for their favorite activity, I managed to secure a spot in a ski-touring group that would leave the next morning at nine. 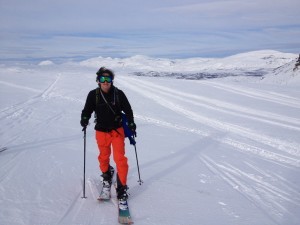 he next day was just incredible. Not having ever done a ski tour or back country hike on a splitboard before, it was all new to me. Not being a skier, having ski like appendages on my feet was strange, not going sideways got some getting used to as well. (But I did start to see what all the skiing fuss was all about 😉 ). The technique of not stepping but sliding brought a lot of relief to my upper legs once I got the hang of it. And once again I found the value in rhythm. I wrote about it in an earlier blog;  just taking one step at time, not focussing on how fast you are going but just on rhythm, is what really gets you up the mountain. What grew in me was a real appreciation of slowness. Everything just slows down and becomes relaxed and totally stress free. I felt more patience then I have felt in a long time, a smile on my face throughout. Sure it was physically demanding, the breathability of my gear was put to the test. But there a steeper places than north Sweden, and it was just the perfect introduction to ski touring. 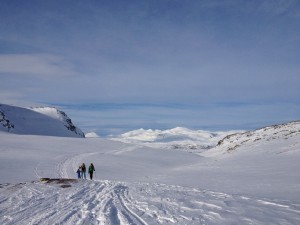 All the slowing down, and taking one step at a time really free’s you up to lift your head and consider your surroundings. And it’s just so vast and beautiful up there. Being a resident of the Netherlands, one of the most cramped countries in the world (475 people per square kilometer), the endless open space here with just nothing more than mountains, snow and the occasional forest as far as I could see, took what little breath I had away, but gave so much energy at the same time.

At noon the wind really picked up, luckily blowing at our back and the sun broke through the last of the clouds. Sun hit swirling snow, racing up the mountain ahead of us: a spectacle of nature. Big smiles all around.

After a brief visit to a restaurant at the summit, which is said to bake delicious waffles, we had to head down immediately again (no time for waffles, doh!). I was really looking forward to the descent, as the predicted reward for all the work we put into the ascent. But where the ascent wasn’t the steepest ever, the descent wasn’t steep either, at all, in the least,….we had to do a lot of traversing, and if there is one thing I as a snowboarder dislike with  vengeance, its traversing. Especially up hill. At various intervals I had to strap off my now assembled split board, and struggle through the snow to the point where the skiers were patiently waiting for me. Those moments left me longing to split my board and stick under the skins again. 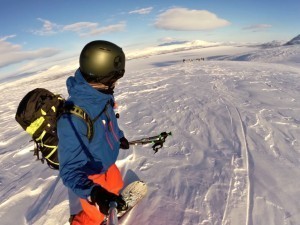 Luckily the snow was icy here and there, so it wasn’t all a knee deep battle forward, and where I blessed the icy bits up hill, I cursed them going down. No deep pow, but “bruchharsch” as they say in the Alps, a hard icy top layer with softer snow beneath. And in some places just only ice, the snow being wind blown over the mountain. Which was still beautiful, and the light was beautiful and I did manage to get some really decent turns in on fairly soft snow. So there really is no place for complaining. I would however like to revisit in a bit better snow conditions and find alternative routes that will offer the thrill that a great descent can give you. But as Jeremy Jones put it: “The journey is the reward.” and in my own small way I felt very rewarded indeed.

The evening brought rest for my weary legs and a very interesting lecture by Jacopo Bafucchi, a 15 year veteran of mountain rescue in the Alps, about avalanche safety. He started with a great quote from Alice in Wonderland “I give myself very good advice, but I very seldom follow it.” and went on to explain how you have to try to keep working at educating people about avalanche safety and how you can actively work on seriously minimizing risk of avalanche based fatalities. There is just a lot of misinformation and ignorance out there, and as a whole, as a community of dedicated outdoor and wintersports enthousiasts, we need to work on actively educating people around us about the risks involved. In the future we will be paying more attention to this subject matter on GearLimits.com.

The next day would be our last, seeing as Sunday would be spent on travelling back home. And it started in style. We were offered the possibility to go heli-skiing, and never having done that, I was obviously, totally stoked. The weather conditions in the morning weren’t great, but the forecast was that around none the winds would start shifting, chasing away the clouds that made visibility poor in the area we would be dropped. But at 13:00 the winds were still the same, and even after taking a lot of time for a security briefing nothing had changed. In the end the flight had to be cancelled due to persistent high winds and low visibility; leaving me with an unchecked box on my bucket list. Guess I’ll have to come back some time and try again, especially since Riksgränsen is one of the last places in Europe where you can heli-ski.

But such is life, isn’t it? And there are worse things that can happen to you than having to hit the slopes to board off the dissapointement, right?

And that’s what we did. A glorious afternoon of in-bounds and out of bounds boarding and skiing with new friends. Beautiful vista’s of the immense expanse of north Sweden stretching out below us. Challenging snow conditions, with a lot of icy terrain, but a soft snowy parts here and there. I just kept enjoying myself tremendously all day long as for us the Arcit Weekend came to an end. But not before we headed out in the night, snowhoes beneath our feet, to look for the Aurora Borealis. Like a green rippling curtain of light it stretched over our heads, the absolute epitome of arctic beauty. Wow, just wow.

All in all I had a wonderful time. With the company of new friends, the fabulous and absolutely overwhelming nature and all the new experiences I had. To me, that is what outdoor and action sports are really all about: new discoveries, new experiences. Every step brings something new, something thrilling, awe-inspiring, scary at times, but always new.

Thanks to everyone there, our friends at Haglöfs and Haglöfs Benelux for the opportunity to experience this great event.