Dutch specialist snowboard retailer Frosty Snowboarding gave us the opportunity to test two snowboards. Two totally different boards that would both produce tremendous amounts of fun in their own way. In this review we are taking a look at the Salomon Derby 151. But be sure to check out the review of the Rome Anthem SS 163; nothing less than a rocket as far as I am concerned.

When I was handed the board, I was a bit doubtful. I am 1.88 m and 90kilo so the size of the board 151 cm seemed a bit on the short side. Our friends at Frosty however told me not to worry. This board would really surprise me in a good way. Advice was to stay in a more upright relaxed position, not attack the snow too much, not too much pressure on the front leg and I would fly.

The predecessor of the  Derby 151 is creatively named the Powder Snake. The green deck of the Derby carries this legacy with a nice picture of a snake coiled around a feathered arrow. Good to know which way you’re supposed to go ;-). The board I tested is from 2014, a Pow rockerboard, sporting a flat profile between the bindings, and extra rocker on the nose and tail, producing more float in deeper snow. The shape is aimed at maneuverability and really makes short turns and edge to edge transition extremely easy. The flex in the board is medium and gives a nice lose feeling. 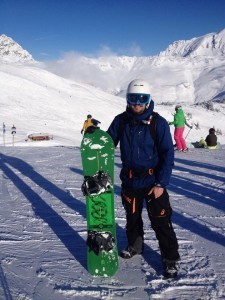 It is very obvious what the Derby has been made for and it excels at just that. Short turns on steep powdery slopes enable you to snake your way down couloirs with ease, transitioning easily into wide and long carve lines on broader shoulders of the mountain. I have been able to perform in ways I have never been able to perform at before. I followed the advice of my Frosty friends, relaxed on the board, lifted the nose at times and that did the trick. I was flying. What a complete blast the Derby is in fresh snow. Short long, floating over pristine snow banks, but also superior control on much steeper slopes and tight couloirs where you really had to use that short board for tight turns, not always easy in deeper snow. Despite relatively short snowboarding career (lost time I am trying to make good on with a vengeance) and still developing skills I was able to really handle my surroundings and do things I had never done before.

On groomers the story is slightly different. The slopes had been prepared perfectly, weren’t icy at all and from the get go the Derby did fine. In comparison to longer boards its really maneuverable and you can just throw it around willy nilly. But the length and shape of the board als prevent the board from holding a steady line when speeds increase. When and if they increase because the board isn’t in a hurry to get anywhere, and you really have to push it to build up speed. But once you hit the 40kph it starts feeling wobbly. But the Derby isn’t a board made for bombing down groomers in the first place. Salomon has clearly meant this board to excel in the powder, and if that is what you want in a snowboard, the Salomon Derby 151 is right for you.

A tremendous snowboard for powder days and off-piste descents. Manouverable with great floatitness. Fun board for big smiles on powdery days.