Not half a year after making this review I actually bought the board for Frosty Snowboarding. I just loved it too much. Went boarding with it in Sweden. Met with very icy, wind swept snow conditions and also there the board gripped like a lunatic and just kept pushing on speed. Amazing.

Dutch specialist snowboard retailer Frosty Snowboarding gave us the opportunity to test two snowboards. Two totally different boards that would both produce tremendous amounts of fun in their own way. In this review we are taking a look at the Rome Anthem SS 163. But be sure to check out the review of the Salomon Derby 151; a delicious powder board.

I was presented with the Rome Anthem as a board that wasn’t meant for the faint hearted and actually for more experienced even advanced boarders. I’ve been boarding fanatically for the better of almost two years but am no where near to being advanced. I’ve had experience with rocker boards and my own Flow Drifter, a hybrid rocker but this camber board with just a bit of a rocker on the tip an tail, was slightly daunting, in a good way.

Off I went and for the first two days of boarding I avoided this long killer of a board. I started off on my own board, and on the second day ventured on to the Salomon Derby. It being a powder day that was the good choice. But then the third day came along, and I decided to strap on the Anthem and take it for, well not too much of spin, hopefully. From the moment I took my first slope I was in love with this board. The acceleration, the speed nd power, and the continuous grip on the groomers was just amazing. I was able to keep on pushing the limits of speed, and only the sometimes crowded pistes around Lech especially prevented me from going all out and shooting over rollers. One close encounter with a boarder sitting just over the roller made me check my speed a bit more often. I hit my maximum on that day of just under 70kph. The next and final day of my trip I went for more, but circumstances were not as good as the first day and I made it up to my PR but not over unfortunately. 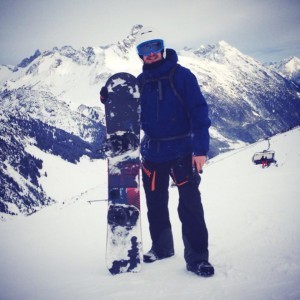 During these two days of massive speed (certainly for me) and just tremendous long line carving the Anthem just  kept gripping, save a few slides on really icy bits and two slightly heavier crashes; but those were just me going really up to the edge of what I could handle. With more technical skills on my part I am sure this board would hold that as well. What I found really cool is how well this board does on straight lines. Never experienced that in a snowboard. Incredible. As for handling I was able to really transition form edge to edge quite easily and turn quite quickly when faced with surprising lines of other people on the slopes. Speed checks and sudden stops were easy and light enough. The board is quite stiff and reacts to what you want to do quite well. It takes a bit more effort, but being 1.88m and 90kilos I had the feeling it was quite suited for my build and riding style. 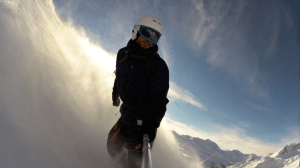 I did try out some off-piste lines where the snow was deeper but didn’t manage too well there. Once again my own limitations, primarily, putting too much pressure on the front and make the turns just too tight I guess. Then again, we are talking about a camber board and while I am sure with more skill one could manage in the powder with this board, there are boards that are better suited for those conditions. The Anthem is just really at home on groomers, and I just had the thrill of a lifetime.
I’ve learned to love the camber set-up and am sure to get me one of these when the opportunity (or financial space) allows.

I would recommend this product to my friends.