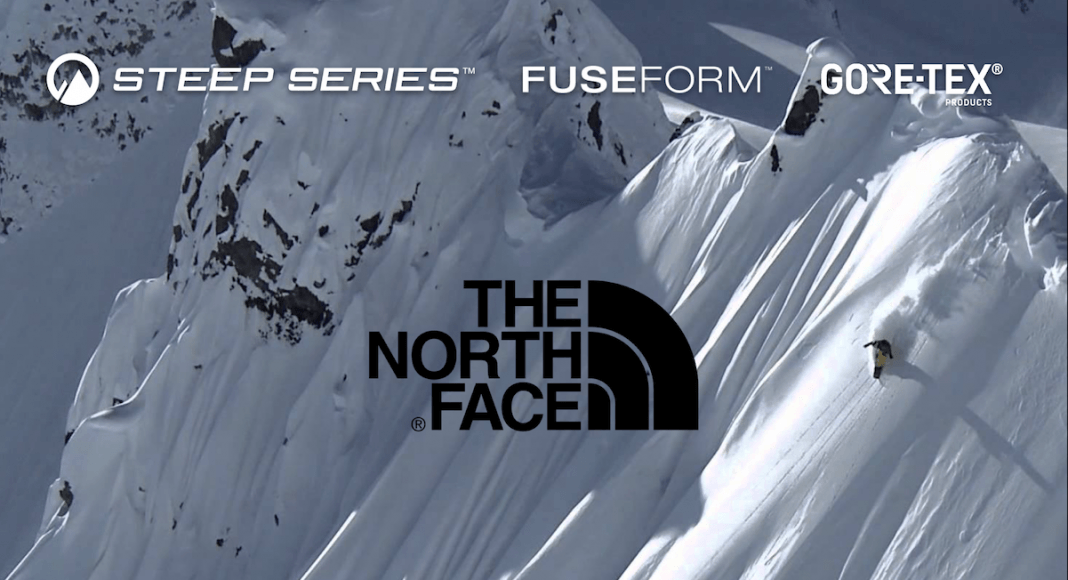 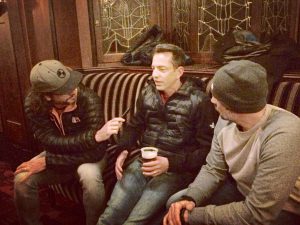 Tuschinski Amsterdam, a part of me really want to be in the theatre watching the most amazing freeride movies of the moment. The Amsterdam Freeride Festival is on and we are surrounded by guys and girls in various combinations of hats, caps and beanies, chequered shirts and baggy hoodies achieving to get into the showings. But we have the opportunity to talk gear with Mark Maffe, Category Manager EMEA for the North Face. And seeing as talking gear is really high up on the lists of what I like to do, I sit down, together with my GearLimits partner Hayco to talk about new and very exciting stuff coming out. We’re hoping on a scoop or two, and turns out we get exactly that.

“We’re shooting our pinnacle collection Steep Series through a major innovation cannon: this is our high-end offering and our most technical approach on snow sports especially big-mountain freeriding.” Major innovation cannons sound like the bomb, but what is so revolutionary about it?

This is what the North Face calls their FormFuse fabric. But neither the Steep Series nor FormFuse are really new (though great in their own right). If we google FormFuse and Steep Series, we get a lot of results already: where’s the scoop in that? Well, off goes the innovation cannon for the first time:

The uniqueness of what will be launched at ISPO is that the North Face has been able to combine FuseForm, which is an offering they have had for a while, with Gore-Tex, and their ability to manipulate the fit of the garments.

“Normally you would receive stretches of fabric that comes off in a nice even sheet and you would apply the Gore laminate. When working with FuseForm each individual panel has to be premade and doesn’t just come off a role. We send these panels to the guys at Gore and the lamination is done by hand. It was huge effort for both of our teams.”

Now you can really engineer garments in a totally different way. Instead of working with patterns, like you would traditionally do in making garments, the FuseForm patterns are coming out of the computer and there is so much more you can do. It really becomes an art through which you can manipulate patterns towards ergonomic fits:

“When you try it on in the store in front of the mirror, some things doesn’t feel right; but when you get into your skiing position or typical movements you would do while skiing, you would feel like its gone, like its not there.” 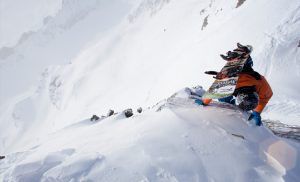 In order to figure out what these positions were, the North Face turned to athletes (like Xavier de la Rue) and worked with them with 3d motion capturing imagery “kind of like Smeagol” and loaded these positions into algorithms to create panels that with the optimal balance. An intensive process that delivered and ergonomic fit to these extremely high0end garments.

The target group for this totally technical and functional athlete drive collection of no compromises articulated fit gear, is the small group of extreme athletes. Not a huge base, but that is not really what this series is about.

The FuseForm Gore-Tex technology will not be featured in any other collection than that pinnacle series. Which actually just consists of two outfits. One for going up, seeing as more and more backcountry skiers and snowboarders are skinning up the mountain rather than being dropped in by helicopter, and one for going down. Pointing it down, extremely-steep-dropping-in-spine-riding- mental descents. Life or death moments. The focus on just these two outfits also result from the contact with their athletes, in which these were asked to pack a duffle with the bare essentials for their season. Out came these two outfits and some mid-layer stuff. So these two outfits will feature prominently at the ISPO.

So what’s there for us normal folk? The North Face mantra, we discuss with Mark, is applicable to many walks of life, and skill level. Is there a relation between the pinnacle stuff and what the regular winter sport enthusiast will be seeing? There is, although everything we talk about, every collection has this uncompromising look at what is technically and functionally needed for the activities that we do. One step down so to speak is the Mountain Pro collection.

Another collection: taking some of the technical elements from the high-end athlete-driven collections. Because there are lot of people who get out and ride many days a year. “They too demand technical fabrics, they want Gore-Tex and premium insulation. They don’t necessarily want to look as if they’re on the freeride world tour. They don’t necessarily want the ergonomic fit. But no compromises on the technical performance of the products is what the North Face stands for.

We point out that, certainly in the Netherlands, people generally want a lot of bang for their buck, and use their products for more than a week of winter sports a year. So how does the North Face look at the versatility of garments? Mark answers that throughout this collection The North Face will not do too much cross-over products. They will stay in activity based siloes and not compromise on technical features and performance of their products.

The North Face is big enough as a brand to make products for more urban environments. And that is a big growing segment, but “as long as we don’t abandon our core values and our commitment to the core outdoor user, we think that is ok”. The North Face has never marketed to the “cool” segment, but it has taken off there.

Scoop #2: The New Back Country

Finally Mark gave us the second scoop of what we will be seeing at ISPO next year. “It’s a totally new direction for the North Face but also the marketplace.” We have noticed and ever growing offering of very cool ski and snowboard edits coming to our social streams through YouTube and Vimeo, culminating in the movies we are seeing today at the Freeride Film Festival. The North Face asked what these badass backcountry jibbing YouTube video featuring athletes were wearing, and what they would like to wear.

“They don’t want to be in the resort but want to go into the backcountry, build their own kickers, do park and pipe tricks off of natural features and film that with their buddies.” They don’t want and need the Steep Series; its about fun, self expressions, a couple of bears, build a fire.

“They don’t want the super baggy fit, but they also don’t want to look like normal skiers. Elongated fits, not baggy, we actually looked at skinny jeans, though you can’t go too skinny, obviously, because of the boots, but we have introduced more tapering around the knees for example, and athletes loved that. The colours and patterns to the New Backcountry line will be different as well… subdued but cool, not too much in your face; for guys and girls, because women are certainly a part of this new culture.

When faced with this new collection, the big North Face accounts in countries such as France or Germany didn’t necessarily think of it as something that was completely new, but an opportunity to push the big mountain freeride consumer into something different, “because that space has been standing still for a while. It’s still really technical and functional stuff, but with a fresh, different perspective.”

So as the echoes of the innovation cannon going off subside, and we say good-bye to Mark, we find ourselves looking forward to ISPO even more. We’ll certainly be going to the North Face booth to have a first had look and feel of these new products. And also we’ll be trying to get our hands on some of the new gear The North Face are bringing out. So keep tuned and we’ll keep you up to speed.