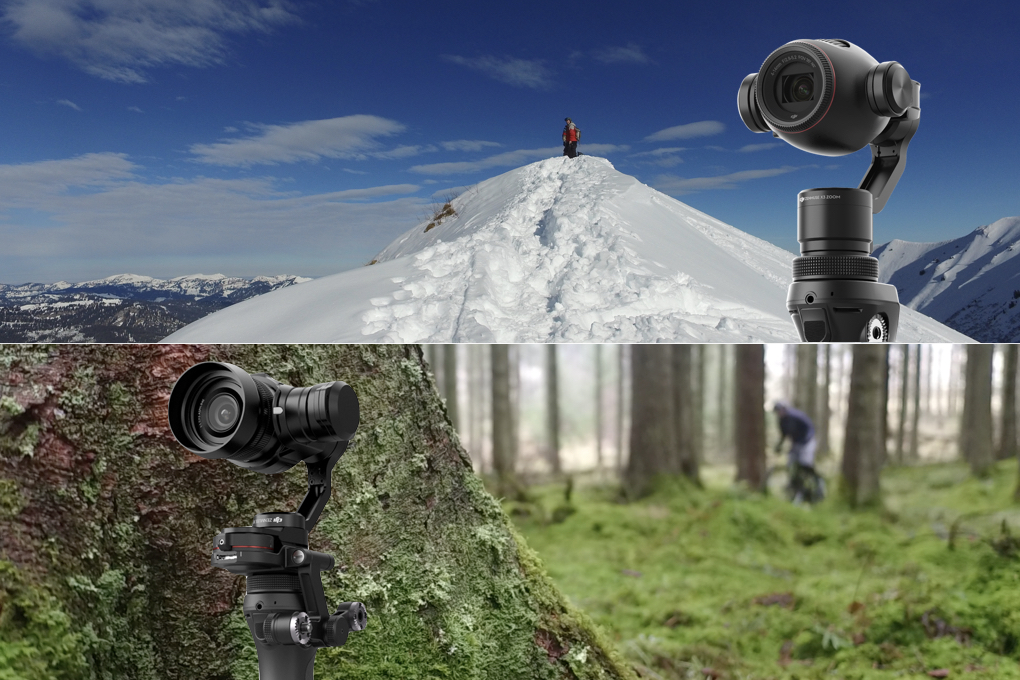 At GearLimits we are producing more and more videos of the most amazing gear. And besides wanting to show that gear in action in the best way possible. Where regular action cams work well but also provide quite shaky or blurred footage, we were looking for stable and crisp images. And because it is in action, we have started to look at the best way to stabilize our filming. As we ride or run down trails and draw first tracks through snow, we

The first cameras we have been able to look at and use extensively are the DJI Osmo X3 and X5; both handheld camera’s with a 3-axis gimbal. We used both cameras in a variety of circumstances and with various activities: 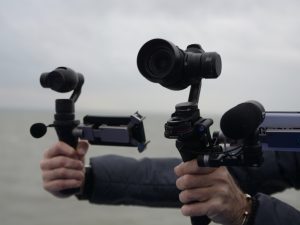 What is a 3-axis gimbal and what is it good for? 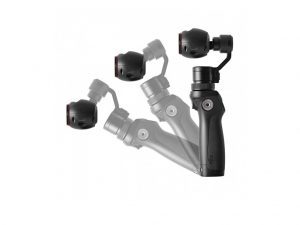 “A Gimbal is a pivoted support that allows a rotation of an object about a single axis.” Mount three gimbals together, each pivoting around a different axis (x, y, and z-axis) and you have the possibility of moving a camera around any which way you while the camera remains level. Movements you make as you walk or even run are smoothed out. The 3-axis gimbal achieves this because it is powered by three tiny separate motors which, connected to sensors measuring movement, compensate for your movements and stabilize the camera. The result is that your shots are smooth and stable and almost seem to float through the air.

Difference between x3 and x5

Both the X3 and the X5 have a three axis gimbal and both offer very good and steady shots. They are very different camera’s however and the differences start with the 3-axis gimbal. The motors themselves make noise. (which is one of the major drawbacks of the camera: we’ll get to that later) but in different ways for the X3 and the X5. The noise is much softer on the X3, I am guessing because the X3 is a much lighter camera than the X5. Also, when you start recording with the X3, the X3 seems to “Shut-up” the noise is brought down to a whisper, while with the X5 the motors emit a continuous and mildly annoying hum. 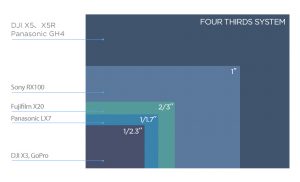 The other and most important difference is the image sensor and consequently the quality of the cameras. While the X3 has more or less “regular” 1/2.3″ CMOS sensor which you would also find in a GoPro, the X5 is outfitted with an amazing Micro Four Thirds sensor which has a sensor area that is roughly 8 times larger than the 2,3”. The result is just much more color contrast, a lot less “noise” on the image while being able to fit all that quality in a relatively small “package”.

What the two do have in common is that, once you get the feeling of moving the camera around and how the camera head reacts to your movement, the result is amazingly smooth moving shots; as if you were using a dolly or slider. You can add so much more energy and dynamic shots to your edit. What I also found quite useful in shooting the kind of video’s we do (kind of vlogging style) is the selfie mode. You can triple click the trigger on the grip and the camera swings around to face you. We did interview intros and complete interviews in this mode. Double clicking the trigger once again swings it back to the front and the camera head aligns itself to a horizontal position. This al works very well.

So let’s look at each camera individually and reach a conclusion on what they’re good at and good for. 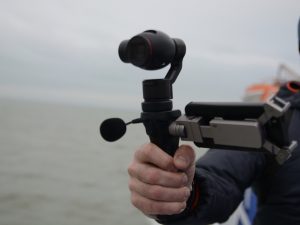 The X3 is the closest you would get to an actual action-cam, without it wanting to be an action cam. The reason I say this is because it is a point and shoot kind of camera, in most cases that is what action cams are. There are some shots I did blind which failed because, when I turned on the camera it measured exposure wrong and kept that measurement throughout the shot, resulting in 3,5 minutes of over exposed uselessness.

With a Field of View of 94 degrees (where most action cams have 150 degrees plus), you do need to get a good feel what you are pointing at as you film.

The depth of focus is quite similar and that is where the similarity is the greatest and why it is more suitable than the X5 for filming fast moving action. 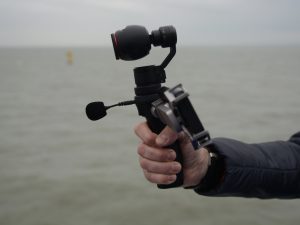 I have not mentioned however that like the X5, the X3 you control the X3 on your phone, choosing your settings in the DJI Go app which connects through the camera’s own wifi signal (password 12341234 always). The X3 has a special attachable phone holder that grips your phone tightly (providing you don’t have too thick of a phone case). It does not lock in the phone, however, and using the camera in action during a freeriding session was a bit sketchy. Keeping my fingers crossed that I wouldn’t lose my phone in the event of a fall. I did have quite a high-speed crash while filming, (check out this film at …. minutes) and the holder did,…well,…hold on to the phone. 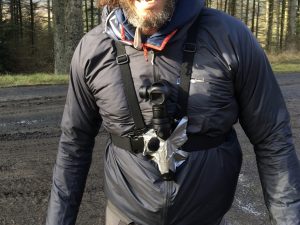 Of the two cameras’s the X3 is much more in the range of an action cam that a “regular” consumer would buy. However, it is not an action cam in the sense that it is not waterproof and you can’t bang the camera around like you would a GoPro. The Field of View is also much more narrow than on a GoPro for example. That does mean you don’t have to get as close to the object you are filming to get the feeling that you are close enough. The X3 doesn’t really have action sports mounts at this time, but with a few inches of duct tape and a chest-mount, you can make some cool and very steady POV shots.

As for a few video specs: the X3 films 4K to a max of 25 frames per second, while 1080p (full HD) can be filmed at 120 fps. So that says slo-mo action footage more than glorious nature shots. For complete specs check out the DJI Osmo website.

The audio on the X3 is fair. It even works without the DJI Fleximic that we received in our rental kit. Which means you can also “forget” about it a bit and have effective audio to your film. As mentioned earlier, the X3 has a silent recording mode, in which the noise of the gimbal motors is silenced when you press the record button.

In this video of the Bergans Freeride Experience, we used a lot of X3 images. 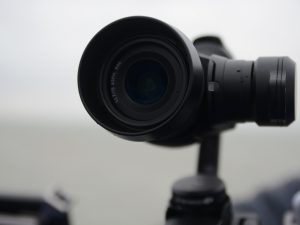 First of all, the image quality, the way you can play with the depth of focus, the color richness, the crispness of the images it all makes the X5 a camera that delivers amazing picture quality. It is a more difficult camera to handle though. Because you are working with shallow depths of focus you have to continuously monitor and readjust your focus as it relates to the subject you are filming. Moreover, because you are filming moving shots, keeping your focus where you want it to be is a continuous challenge in itself. I am not terribly convinced of the autofocus on the X5, that is something DJI could improve on significantly. You can manually make the depth of focus longer so that stuff going out of focus is less of a problem. 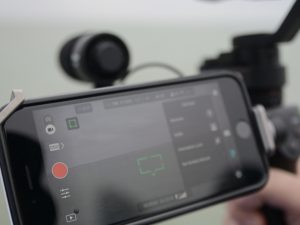 You absolutely are dependent on the DJI App on your phone to use the X5. Because the only way to focus effectively is by tapping your focus point on the live view of the camera in the app. I used a number of the X5 camera’s during various productions and every camera found it difficult at times to establish the correct focus point when there was lower light, or the object didn’t have enough contrast. Making close-ups, was particularly challenging if the object of the close-up was moving too much before focus was established. Once you do have focus, you get those gorgeous images again.

About the audio, on the X5 I can be quite clear: it’s awful. really, useless. The main reason for this is that the gimbal engines just won’t shut up. Unlike the X3, the X5 gimbal engines continue their humming as you film. If you only use the Fleximic, you’ll have this hum under your footage all the time. We attached separate Rhode mics on to the camera which also picked up the hum of the engines. Filming indoors with other microphones positioned separately still picked it up. Not until we used lavalier mic’s cold we get rid of the hum under our footage. So quite annoying and complicates editing to no end, having to match external audio tracks to your camera footage. If you don’t attach any mic, by the way, the camera will record no audio at all, and matching audio tracks will be even more of a challenge. So I always used at least the Fleximic on the camera to have my baseline audio. On various occasions, the audio still didn’t pick up anything, even though the Fleximic was attached. Consecutive shots sometimes did and sometimes didn’t have any or sometimes distorted audio. Enough said about the audio. The X5 scores “zero points” no that. 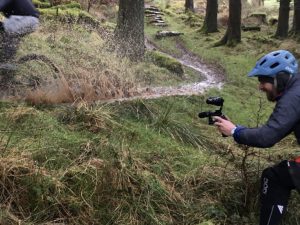 So what would you use the X5 for? Perhaps for regular action filming it is, not the most practical, because of the fact that keeping stuff in focus is quite difficult. If that were fixed it would be much easier. What it excels at is shots of nature, where you want crisp and contrast images, moving shots through a forest or along rocks is amazing. Interviews can be gorgeous as well, but be sure to pack additional audio recording material.

This video was shot almost completely with the X5.

One last thing I would like to mention about both cameras is that connecting the camera to your phone, establishing the needed wifi connection and getting the live images on screen was at times quite difficult and time-consuming. In a variety of circumstances, this was difficult; on the mountain, in the rain, but also in offices where there was a lot of interference from other wifi or radio signals. The DJI Mavic we also used and will be reviewing has a cabled connection, which is, in my opinion, a much easier and better way to connect which will work every time. Because you need your phone, you always need a number of minutes to turn on the camera’ connect it to the phone and start filming. 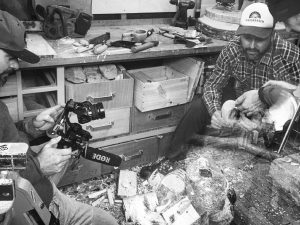 When I started using the camera’s, I was convinced we would be buying one or both in the end. I am absolutely in love with the smooth and stable shots, the image quality and all that packaged into this small camera you can use with one hand. Having used them more and more in different circumstances I am not that convinced any more. I do still need the stabilization, that without a doubt, and once you start filming in the beautiful quality the X5 certainly provides, it’s hard to be happy with less. However, the issues with the connectivity and handling of the camera added to the audio fail on the X5 has convinced me to wait and see if the next iterations of these cameras will be able to solve those problems. If so, I would certainly consider buying, probably the DJI OSMO X5.

We would like to thank Budgetcam.nl, the company we rent our camera equipment from on a regular basis, for providing us with de X5 for our project in the UK.