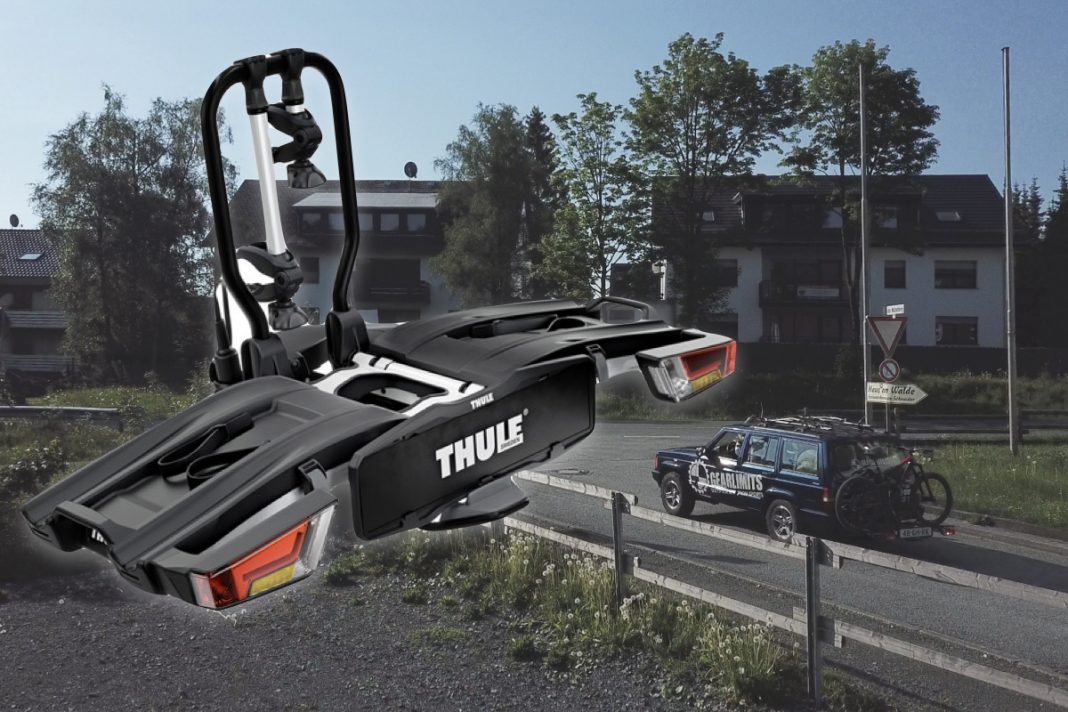 For our review trip with 4 mountain bikes to Winterberg we were able to use the Thule Easy Fold XT2 for the first time, a foldable bike carrier that promises to be able to carry wider tires and heavier bikes. Since then I have used the bike carrier quite often and recently also used it on summer holidays to the Spanish Pyrenees and Southern Spain with an E-Bike and a non-electric enduro bike on the back.

On the back of our GearLimits Jeep on the way to Winterberg I noticed how stable the bike carrier was on the towbar. Where my own folding towbar bicycle carrier sometimes bounces back and forth a bit in the event of unevenness on the road, the Thule remained steady in my rearview mirror, which reassures one that nothing is going to bounce of the car into somebodies windshield. Imagine a 25 kilo e-bike strapped to a bike carrier bouncing at you on the motorway. Yikes…

What has struck me in the use of the Easy Fold is that everything is very user-friendly. First of all, the bike carrier is easy to tilt away so that your tailgate can be opened and which also allows easy access to the trunk. To be honest, it took me a bit to find out about the foot pedal that operates the tilt, but once I read the user instructions 😉 I used the pedal a lot. Even when loaded with a heavy e-bike and enduro bikes, the carrier remains rock solid and stead as you tilt it away. So there are no concerns that the bikes might fall to the ground despite the extreme angle at which the carrier tilts away. So super.

What I also found worked quite well is that the bicycle arms, which hold the bicycles, can be easily removed from the carrier to reposition them so that you can find the right position to fix them to the frame the bikes. As you turn the knobs to clamp down on the frame of a bike, the torque limiter on the knobs click clearly when the knob is tight enough. Though with carbon frames it is still advisable to use a carbon frame protector.

The knobs can also be locked so that your bikes are (relatively) safe on the carrier. (Although if you leave them on the carrier when you are away from the car for a while I would advise extra locks.)

It’s extremely easy to put the carrier onto the towbar, it evens out really quickly and with the handle that gives a lot of torque you clamp the carrier to the towbar easily. Security lock closed and you’re good to go. Unloading it is just as simple.

For securing your tires / wheels, the Easy Fold has extra long binders that can be tightened using pump buckles. I noticed that despite the length of the binders I occasionally almost came up short with them. This was mainly because in the combination of the two bicycles together on the carrier and squeezing the bicycle arms between the frames, the bikes were not optimally centered on the carrier. Which meant that one tire was further away from the pump buckles than others. It would have been useful if the position of the buckles could slide on the frame. The width of the wheel holders was perfect for the thick tires (not fatbike) that I put on the bikes.

The Thule Easy Fold XT2 is a very good and smartly constructed bike carrier, using really high quality materials. Due account has been taken of the requirements of large frames, thick tires and wide frames. It is not a cheap bike carrier but it is really good, and because it is very easy to fold, also easy to store.