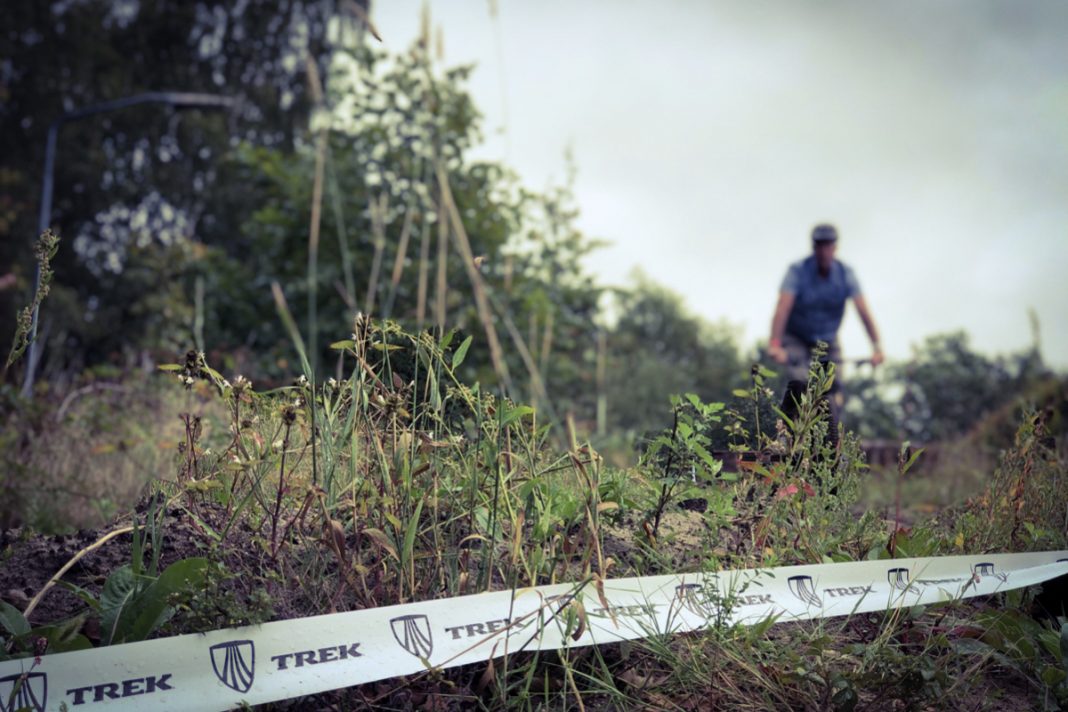 As I drive back through the rain I suddenly think, why didn’t I ride the bikes? They were standing there, waiting for me, the brand new TREK lineup, with the updated Fuel EX which we reviewed in a previous version, the Top Fuel as well. It may have been the queues of MTB fans waiting for a chance to try the bikes or the fact that I was actually semi-feverish and hadn’t really dressed for the drizzly weather (only a t-shirt). But also…

Since my mountain bike was stolen in Sweden three weeks ago, I have not been on the bike. I have told myself that I would not be riding in a while now, just to temper expectations, until I have found a new bike of my own. With those blinders on, I may not have recognized the opportunity to get on and just ride a really good bike again. Maybe I was still in mourning over my lovely bike, or maybe my brain was just flooded with snot,..anyway…

And what an opportunity I missed because of it. It was a TREK day, all about MTB-fans, admiring, riding and playing with bikes. And luckily a lot of people did that, despite the less than beautiful weather. The four clans intermingled, road cyclists, mountain bikers, people looking for good regular bikes and/or interested in e-bikes. A very large group.

More than 750 people went to TREK Benelux HQ in Harderwijk, and I was among them. I took the time to check out the bikes, shiny set-ups, the new full suspension TREK EX line, the Top Fuel, the ProCaliber and PowerFly eMTBs. Beautiful bikes.

“But this new model is THE BOMB. IT climbs like crazy.”

What stands out about the full suspension MTBs is that on all models TREK has moved away from the Full Float suspension linkage system and the damper has now been attached to the down tube. Our contributor Roy Snijder, a great connoisseur of TREK bikes and also present during the day, did ride a number of the new bikes and agrees that the bikes feel stiffer because of this new linkage. He rode the Top Fuel 9.8 and the Fuel EX 9.9, both high-end carbon versions of the two bicycles.

“The Top Fuel is a super-light carbon tank. In recent years I have not really been a fan of this bike. I once had one myself but it never felt like my buddy. But this new model is a bomb. It climbs like crazy. Certainly now with the 29” wheels, you will get up the hill well quick. Still an XC race fully but tougher than before !!”

The Fuel EX is totally Roy’s favorite: “This bike is a real party … thick carbon 29ers. It climbs like nothing else and rides really like an enduro charger. Despite the 130/140 mm spring travel, it feels as if it has more travel. The cool thing about the Fuel EX is it actually is a bit like the Remedy from a few years ago, which I also had and was a big favorite of mine.”

Good conversations with people who really like cycling, … that nice candy store with cool bikes …

Besides looking and trying out the bikes the great thing about a day such as this are the conversations. Of course with our friends at TREK, but also with fellow MTB geeks. As I’m chatting away with Martin Sneeuw from TREK, a Trek fan joins us and tells us how he wants to buy a new bike, but still is ping-ponging between different bikes, in particular with regard to the difference in suspension, the Top Fuel, or the Fuel EX? He thinks the Remedy is also badass, but perhaps too overpowered for the Netherlands (we don’t have that many mountains nor rocky descents here). He really has done his homework also appears to have seen the reviews of the last two bikes on GearLimits. It is nice to notice in person that we can play a positive role in the search for the perfect bike for someone.

And that there are a lot of variables, and bicycle brands are always looking for the best combinations in geometry, spring travel, fitting, wheels, and tire choice, that is also clear in the new line of the Fuel EX.

The reach is larger than in the past, the head tube angle is slightly slacker, which in combination should offer more stability when descending, but the seat post is steeper so that you should find yourself placed more above your pedals, which improves the pedaling efficiency.

The dampers, which are now mounted on the lower tube for more rigidity, have Fox RE: Activ dampers on the 9.8 and 9.9 models. The regressive damping of the dampers should ensure that the damper remains rigid when the force is applied to it at low speed (such as when pedaling) but does respond when the damper has to work at high speed (with obstacles such as roots, stones, etc.).

Although I did not ride the bikes themselves (that will certainly come soon), looking back, I was very happy with the day. Good conversations with people who really like riding, I enjoyed watching young kids who did some laps with the guys from Mountainbikeclinics.nl, and of course, that nice candy store of cool bikes … It is time I started looking for a new one.

Will it be a TREK? There are a lot of options!

Trek & Bontrager sets a new standard in safety with Wavecel