Just last week I posted a bit about two longboarders ripping up the hills of San Francisco and bringing snowboard types skills to concrete. And now just a few days, while surfin the Interweb I ran into Freeborders. Not know to me as of yet, but really cool. So what’s it all about?

Freebord has been building skateboards with which you can snowboard the streets since 1997, and have been working on their technology and perfecting it through the years. Browsing their website and checking out all the spec lingo, you run into so much snowboard and skateboarding terminology you can really tell this is all out hybrid crossover product. 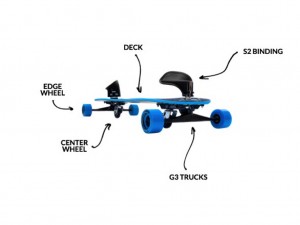 The product is made up of three parts: the trucks, the deck and the “bindings”. The trucks are like skateboard trucks but added are “two caster (center) wheels located in the middle of the trucks.” These two wheels are slightly lower than the outer wheels. These center wheels are the core of what makes the Freebord behave like a snowboard: they create rocker, enabling you to slide sideways, carve and come to sliding stops.

Their latest improvement on the trucks (so called G3-R) see’s the wheels angled at a 4 degree’s (much akin to edges of a snowboard tuned to an x amount of degree’s). And like with a snowboard this angle provides you more opportunity to smoothen your ride and increase stopping power.

The bindings are reminescent of snowboarding as well, though these bindings don’t really strap you in, they rather hook your shoes to the board, giving control but also enabling you to step off the board when shit goes south.

Living in flat-ole Netherlands I haven’t run into Freebording on our streets, not much speed you can pick up here. But there are some cool video’s made in the Alps, so maybe I’ll get to try them out in the near future once I head up there. Any (Dutch) readers with tips let us know! For know we are just going to enjoy the coolness online.

The Freebord site also gives some learning tips and tutorials, worth a read if you get the chance to try a Freebord out; cause wiping out on concrete is a bit different than on snow; I’ve had many a mouthful of snow in my time, wouldn’t like to know what concrete or asphalt for that matter, tastes like.