It was a bit of a crazy review and not in a nice way. Normally in our video reviews you see us riding in the forest, and there in those beuatiful surroundings we love so much we want to show you the bike in detail and share our riding experience with you. But in this case the latter was not possible, because just before I wanted to record the spoken part of the video on film, the bike was stolen.

I was in Sweden at the time, had done two wonderful rides, one in Kullaberg and one just outside of Stockholm. It would be our last night in Stockholm when the review bike, the Cube Stereo Hybrid (together with my own private MTB) was stolen. Incredibly frustrating, and it was difficult to try to let the feeling of injustice and powerlessness go for the rest of the vacation. 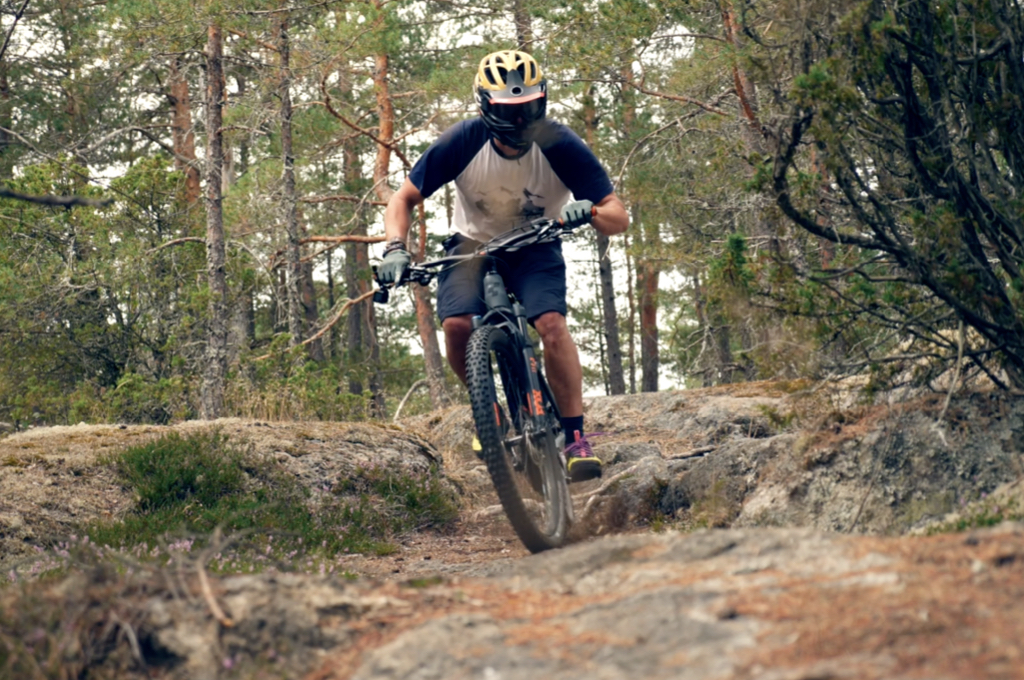 But luckily I had already ridden a lot on the bike, in many different places and conditions. I did a very steep climb in Chamonix and followed trail runners on single track there, I rode the trails of the Utrechtste Heuvelrug and also used the bike for my commute. And so finally in Sweden a super wet wet ride in Kullaberg and on a very nice trail in Lovön , a rocky and wooded island just outside of Stockholm. From super hot and dusty to super wet conditions, from sand and gravel to rocks & roots. So enough impressions and video to share this review with you. 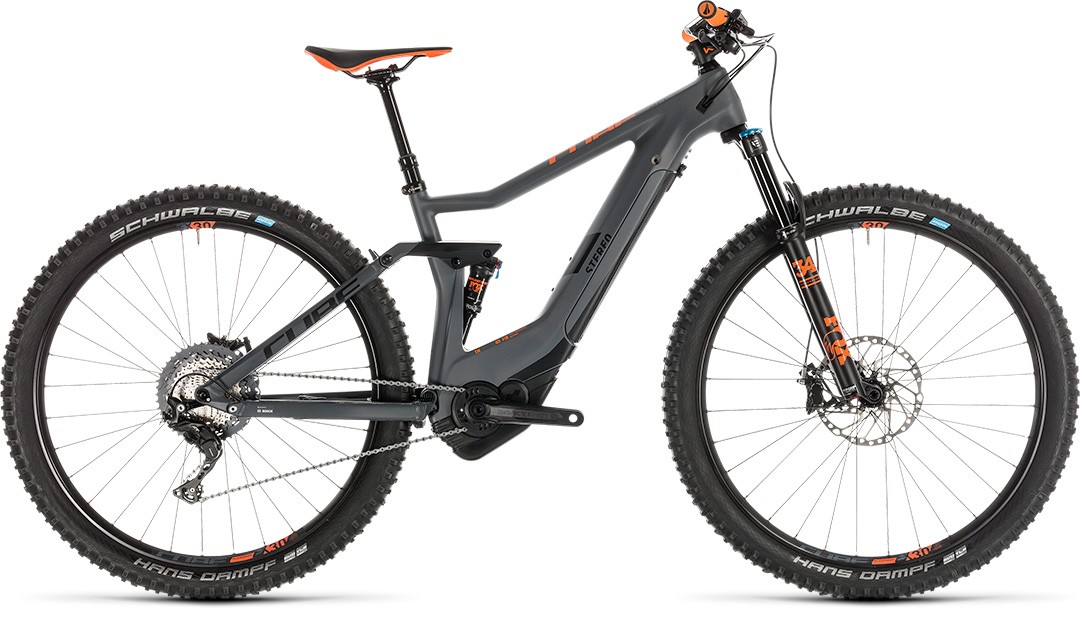 It is a trail bike with 130 mm suspension travel in the front and 120 mm in the back, and I was really pleasantly surprised at what the relatively modest travel on the suspension could handle, especially if you take into account those 10 extra kilos of battery and motor. I had to do really aggressive descents with lots of rocks in Sweden and the bike did surprisingly well. Of course, you can’t charge as much as you could on a light bike with more travel, but it does go pretty well nonetheless. 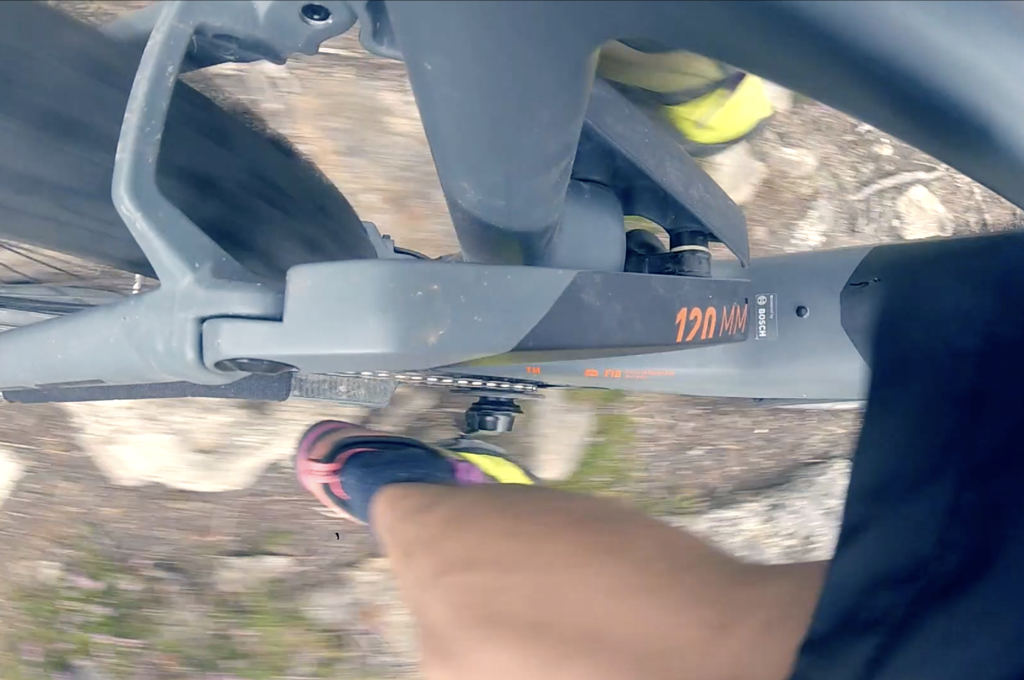 The frame helps with this, made of HPC (High Performance Carbon), where the battery is integrated into the frame (instead of being on top of it) and together with a low-lying engine the center of gravity of the bike is nice and low. This makes the bike very stable. 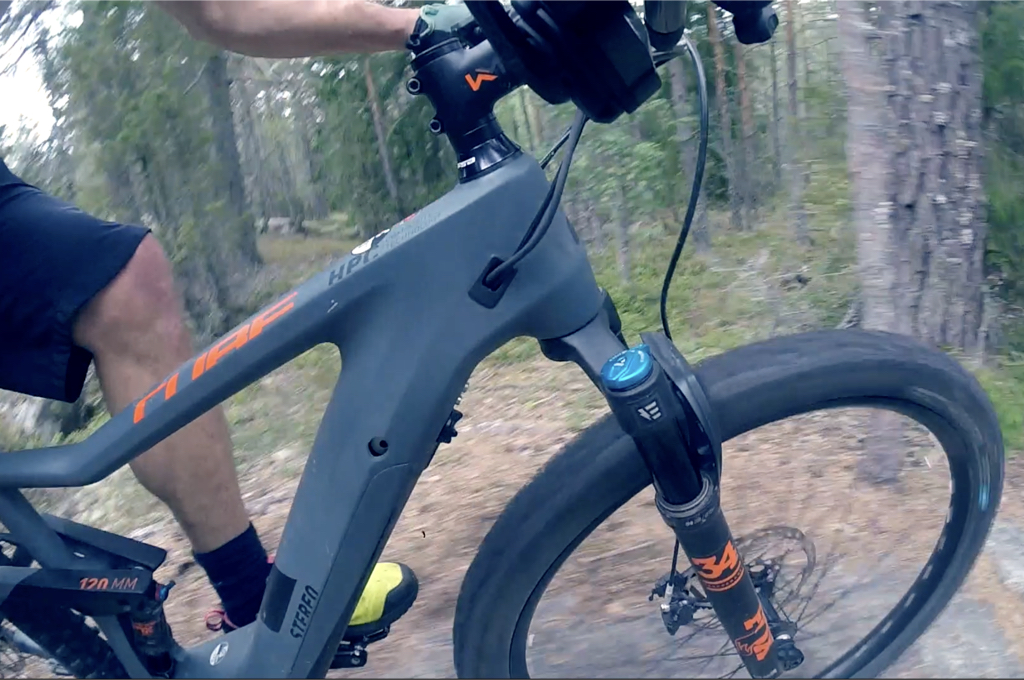 Due to the compact geometry of the bike, you do have to bring your body back well and actively when you go downhill. On climbs that same compactness gives you have a lot of advantages because you want to keep pressure on your front wheel when it gets steep while maintaingin traction on your back tire. I experienced that very actively in Chamonix on a very steep climb. 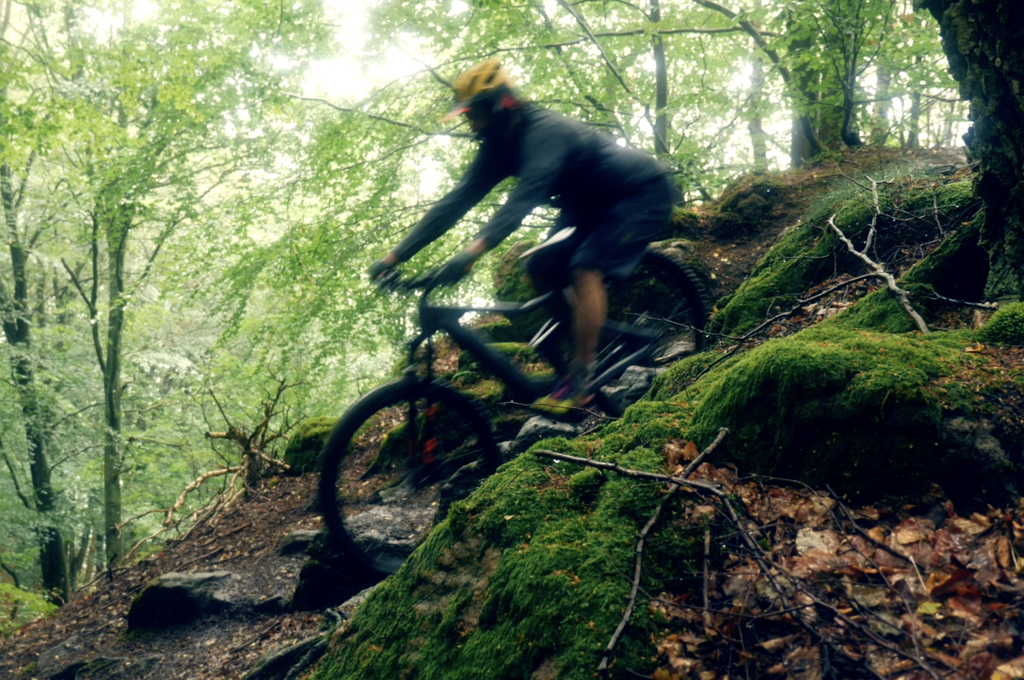 With the saddle/dropper post in the lowest position, a low gear, and the power setting in a low position as well, the bike climbs really well. On steep terrain with little grip you don’t want the torque to be too high, you need many revolutions, and your body position low and forward. That all adds up to the right amount of traction on your rear wheel, and enough pressure on your front wheel to keep the bike tracking. 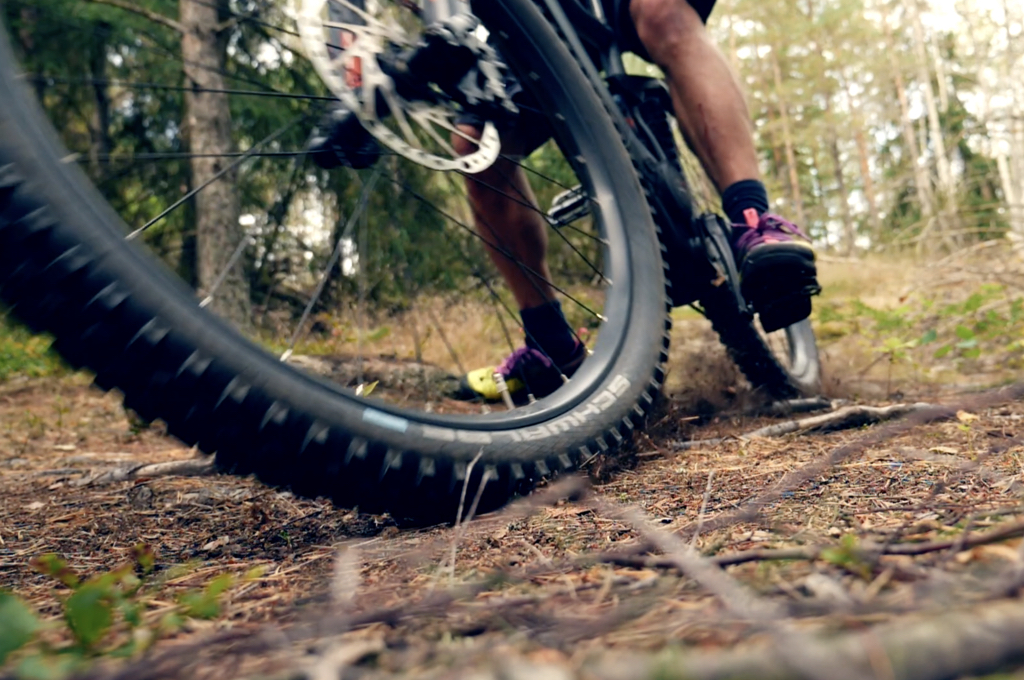 I could really get a feel for the Schwalbe Hans Dampf 2.6 inch tires on the bike on the descent of that same steep and gnarly slope, and they survived the many (often sharp) rocks and boulders and gravel very well. On one of my rides in Sweden, the conditions were totally different, very wet and slippery, and I still had enough grip on wet rocks to do the rocky descents with confidence. The only time I lost it was when I slid away, front tire first, on a steep piece of woodland with a loamy upper layer. 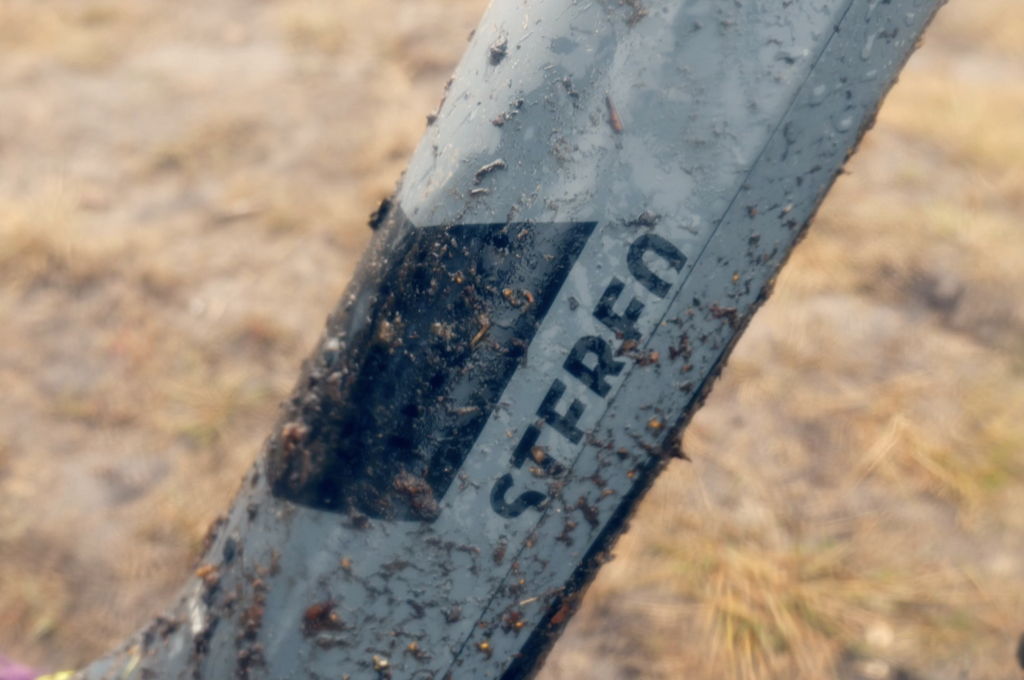 The pedal-assist of the Bosch engine is available in five positions (including off) and I knew this engine from other e-MTBs that I have ridden. It is a powerful engine that delivers the available torque in every setting very directly. Certainly, in the highest setting, that can sometimes feel very abrupt, so that you sometimes get the feeling of being launched a bit. And if you have little grip, your back tire will spin-out irrevocably. The engine also gives a lot of resistance above 25 kph and if the battery is empty or you turn off the engine, it is very difficult, almost too difficult, to get uphill due to the engine drag. So that is a point of improvement for the engine in my opinion. 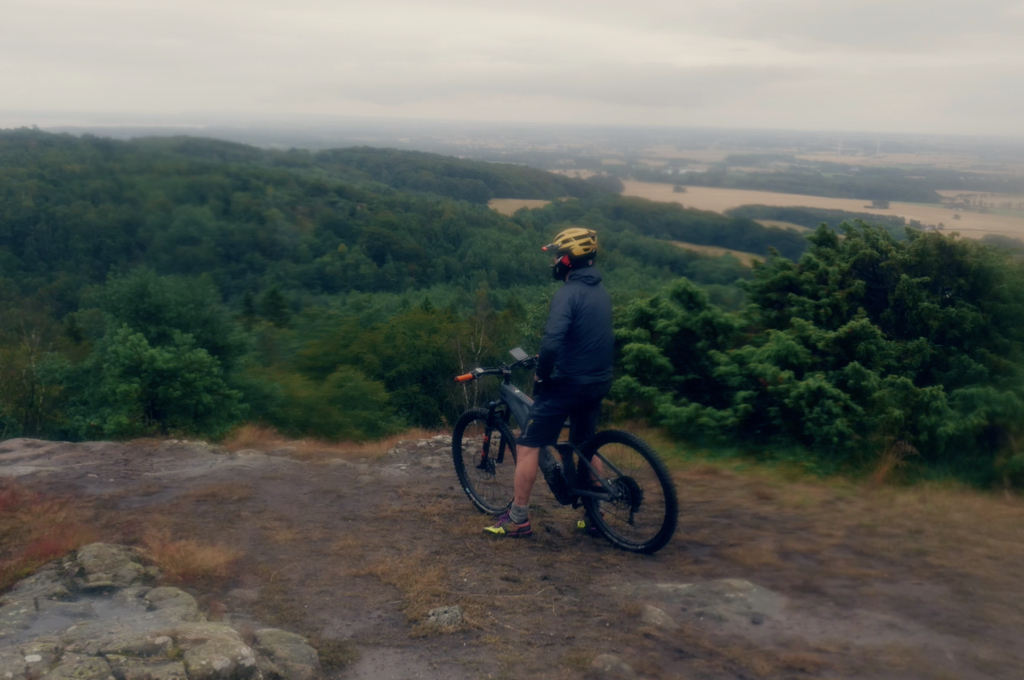 I’ve said it before, and I’ll say it again, the Cube Stereo Hybrid confirms it: for me, an eMTB is an adventure machine more than anything. You can see the extra power and torque as a luxury convenience, I see it mainly as a lot of extra confidence, a back-up for when you go exploring, giving the feeling of actually being able to deal with anything, even when the weather gets bad.

In that respect, I had such an adventurous high-point at the Hakkol summit in Kullaberg on a very wet day. An unmarked trail that I followed via the View Ranger app on my Landrover phone that proved to be able to withstand the rain. The screen showed a climb that found after a short search. Had I been on a regular bike I might have decided not to do it, because it was super wet, very steep, and strewn big rocks and boulders that will kill any speed you need to climb. But with the eMTB, you can hit them with the speed you need to get over them and keep the power after every hit. So and after a relatively short, very intensive climb I suddenly found myself riding out of the forest, and I reaching the top that I didn’t even know was there. And the view there was just breathtaking. (Read here about the whole experience.) The journey of discovery, the adventure, trying out trails, searching, making attempts; it is just so much more attainable on an eMTB. 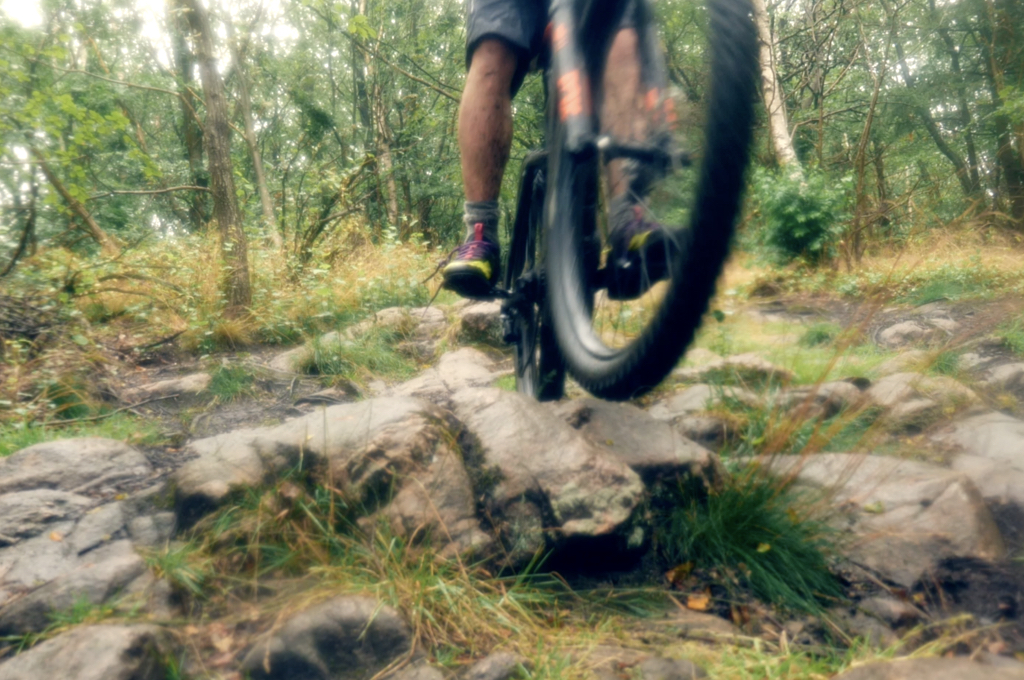 All in all, fantastic experiences again on this bike, and in the end, that’s what it’s all about. “Despite” the modest suspension travel, but thanks to that low center of gravity, you can handle a lot of really technical terrain. The bike climbs very well; the engine is very direct and super strong. With the disadvantage of a lot of eingine drag above 25hph and when the battery is empty or the engine is switched off.

It must have been 2013 when I rode my first trail. With an old Gazelle bike with no suspension, and...
Read more
Advertisment