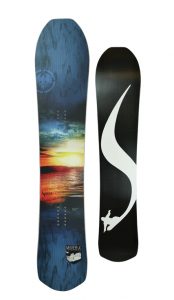 After our first encounter last year with a Never Summer board we were dying to ride one again. The Welcome to the West was just an amazing board last year, so smart and well made. For this years review session we had two Never Summers: the Maverix and the RipSaw. For Seb Jam, one of our testers, the Maverix was the first board he wanted to ride. And he did. But before we get to his review, first a bit more about the board: what kind of board is it, what is it made for? 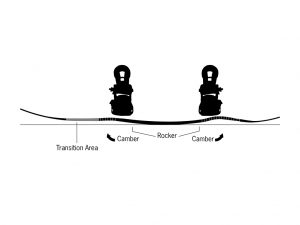 The Maverix is a Freestyle/Freeride/AllMountain board, with a mid flex and a shape and profile that is typical of Never Summer. Camber under the feet, rocker between your bindings a massive flat to rockered nose and a short stump rockered tail. They call this the Fusion Rocker Camber profile and it aims to combine the best characteristics of camber and rocker. Never Summers goal was to create: “A super nimble yet cushy ride with incredible responsiveness. “ The nose, but also the graphics, point to a surfy kind of feel that the board would want to have. 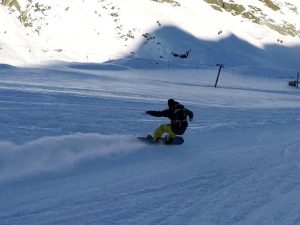 The night before the first day of riding, we lined up the 15 boards in a hotel room to select what to ride and the Maverix was Seb’s first choice. And it did not disappoint; as Seb says in the video, the Maverix was his personal favorite of the 12 men’s boards we rode. Seb loved the nose, praised the short tail and the stability it provided. The shape proved to deliver the grip on the one hand and the playfulness and pop on the other. Seb had a blast on and off piste, throwing it around front and back, and effortlessly gliding in powder. The board is really responsive, meaning it reacts when you blink your eyes. 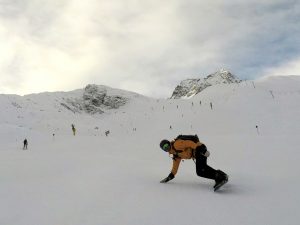 Although it wasn’t my personal favorite, I still had a blast on the board. It delivered grip and was really easy to throw from edge to edge. The funny thing is that the board has quite a lot of flex, but doesn’t feel too soft. It’s amazing how Never Summer really packs a lot of great characteristics into one board producing an amazingly versatile board. A real quiver killer if there ever was one. It’s not something you notice on the first ride, but Never Summer has a reputation for making really tough and durable boards. The NS Superlight Wood Core is reinforced with two types of fiberglass and carbon laminate. The quality of the build is obvious. So it is a bit higher priced than other boards, but it is worth the money we think.

The Maverix is an amazing freestyle/freeride board with which you can slash and burn through anything on the mountain. It will hold when it needs to, and turn on a dime when you tell it to. It is not a beginner board, you need to be able to ride it actively. For intermediate to expert riders, this board is a blast.