When I went looking for information about the DC Space Echo, it was a bit hard to get by. At least the info from DC itself. I always start by trying to find out with what idea in mind the board was made, what we like to call the promise of the product.

Being based in the Netherlands I was redirected to the Dutch DC Shoes site and eventually found a bit of info on the board, including the fact that I could not select the colour of the sole? Clearly a sign that DC did not start off as a snowboard brand, gravitated towards it, and needs to get things a bit more in line. To be honest the DC.com American site was better and there was more information on it. 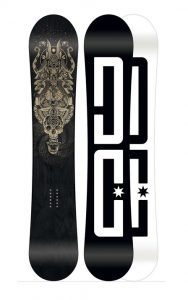 So we did find DC’s promise for the Space Echo. Beneath its mind-bending graphics lies a wooden board with a very traditional stiff, directional camber profile. With a camber that really creeps up very far towards the tip and tail giving the board a lot of effective edge and promising loads of grip with a fast sintered base demanding that grip. So a fairly uncomplicated board that is meant to fit a large variety of terrain to be ridden with power and without fear.

[vc_message]Are you a bit confused by all the terminology flying around? Check out or Snowboard GearGuide for some further explanation. 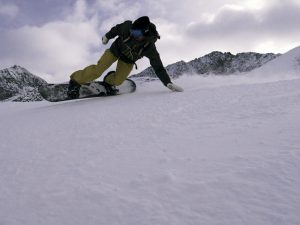 Seb really liked the board. He could really push it, powered down the mountain, point it, slash it, stomp it, jump it, carve it, throw it into Vitelli turns, really just anything he wanted. Big smiles and a lot of happiness. It really fitted him as an expert rider and the way he wants to charge everything with ultimate stability at higher speeds. 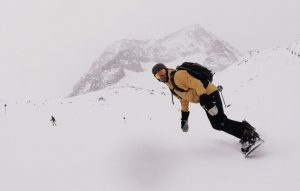 I am less experienced but still had a blast on the board. It is a board that demands to be handled with confidence and power. You need to tell it where it should go, and when you do, it will hold you and make you smile. It will return the confidence you give it. The camber brings grip, as promised, the effective edge is…well, effective, and yet it is easy to throw edge-to-edge and pump around the tracked off-piste crud you sometimes run into.

In conclusion, we can say that the Space Echo delivers on its promise. It’s honest, straightforward, not as psychedelic, as it’s graphics, would seem to suggest. A board for the intermediate rider who wants to push himself and take everything the mountain offers in a day. A board like this deserved more attention and respect than it is given by DC itself: celebrate your shit is what we always like to say!