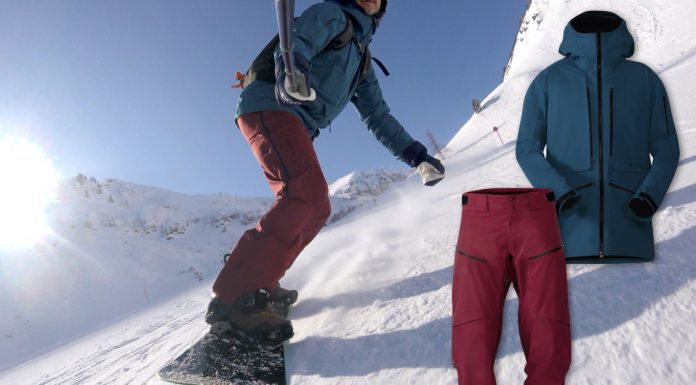 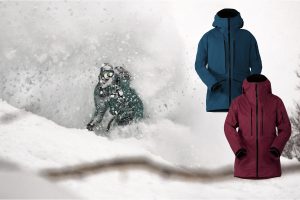 The Netherlands is probably the least mountainous country in the world, with our highest point, the Vaalserberg (Vaalser Mountain) peaking at a whopping 322 meters. And yet a very large part of our population loves mountains, and given an opportunity, we will take any mode of transportation to head to the higher parts of Europe. Each vacation period regular exoduses (is that word?) of our compatriots clog the main arteries of Europe (often with caravans) seeking the freedom and joy of the high terrains.

So from that point of view, it is not particularly surprising that two guys from the Netherlands founded Open Wear a few years ago, with the ambition to produce highly functional freeride (ski & snowboard) apparel, that are completely eco friendly, for a price that would make the larger outdoor apparel brands nervous, and consumers happy.

On the other hand, there’s is possibly the only serious outdoor brand coming from the Netherlands that we can think of. So it is seriously impressive that they managed to launch this brand, market it well, and of course, that the product is as good as it is.

We had the opportunity to review the Open One (their first series) freeride jacket and pants made of 100% recycled PET bottles, with a waterproofness of 45000 mm and a breathability rating of under 0.5 ReT and prices at € 389 and the pants come in at € 319. They only sell through their website, one of the ways they want to keep the prices down. The sets come both in Men and Women versions. For more information on the brand and their ECO-focus check out our recent blog post on the brand.

I wore the Open One set on two occasions, first on a one day quick in and quick out in Garmisch Partenkirchen (Germany), with icy slopes and temperatures in the shade just below zero and in the sun about 7 or 8 degrees Celsius. My second experience was during a week of snowboarding in Kleinwalsertal (Austria), with temperatures ranging from -27 degrees to +5 degrees. Unfortunately, neither of the two times was there powder to be had.

Because powder is what made Open Wear start with these products: the realization that if we did not care better for the planet, the powder we ride today, probably won’t be there tomorrow. So the ideals of the brand are all about sustainability, proving that there is a way to offer more outdoor friendly products without compromising on quality.

If my experience with the set shows anything, is that they seem to be proving it. Of course, the sustainable quality of any product is also dependent on its longevity, (how long it lasts) and I haven’t used it that long yet. So time will tell. But as for the first, in-depth impression, I am very positive.

Both the jack and the pants have a slightly baggy fit and are less tapered than some other (European) brands make their freeride functional sets. That translates into a comfortable, roomy fit, without being to 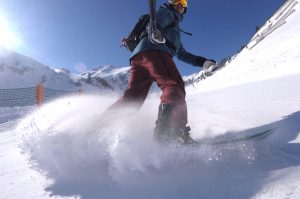 o large or impeding your freedom of movement. The fabric itself is sturdy but supple; not as hard and noisy as some Gore-Tex 3layer jackets/pants can get. In my size L pants, I did use an extra belt to secure it to my enormously slim waist (just kidding obviously); so I would have liked to see the possibility to fit the waist a bit tighter. There is a bib version of the Open One pants, which as a snowboarder I would certainly advise anybody.

Because with the pant, I did notice at times that my back was ever so slightly exposed, even though the jacket is quite long and falls over you but when you are upright. But bending over or forward to strap in sometimes gave a bit of a chill on my back.

The fabric, however, was perfectly wind tight, and the – 27-degree wind howling past me at 80-90 kph did not bother me in any way. Obviously, the mid -and baselayers I was wearing also played a role in that.

As for waterproofness, we did not experience much snow and no rainfall, but sitting in the snow (as snowboarders often do) on my butt and on my knees, does ask a lot from the fabric. The pressure from your body in the snow for prolonged periods of time will put the waterproofness of the fabric to the test. After a 15 minute sit, I did have a cold ass, and only a very slightly darker patch on the fabric, which quickly disappeared. So really good.

At home, I subjected the jacket to a simple water test with quite some water pressure (no scientific and completely calibrated) from a garden hose. At a somewhat heavier mist of drops (similar to a mild rain shower) the water forms droplets on the fabric and that without a DWR layer. With longer and heavier pressure (comparable with solid cats and dogs lasting quite a long time) the water was absorbed a bit more into the outer layer of the fabric, but did not come through the other layers to the inside. Certainly waterproof, although a fabric that has absorbed a lot of water will be slightly heavier and less able to insulate well.

A key feature of a three-layer functional jacket is that it is breathable. The middle of the three layers should wick transpiration filled, warm air to the outside. Obviously, the other layers you wear will very much influence the general feeling of wearing a breathable set of clothing. In my case, I wore a merino base layer and mid layer.

In Garmisch, where the temperature in the sun was quite high, I did feel too warm, and luckily using the large vents under the armpits and on both side of the legs, helped cool things down well. But those temperatures would be a problem for any functional jacket (especially with merino wool sublayers). A better measuring point was a few hikes I did in Kleinwalsertal up the slopes. The temperatures were a lot lower, I did feel my body warm up and I remained comfortable in the Open One set. So my experience of the breathability of the set was good. It remains the result of a combination of factors: the rest of your clothing, the outside temperature and the intensity of what you are doing. 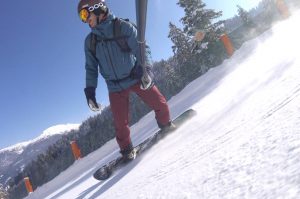 I was quite pleased with various features of the set. Beginning with the large hood that will fit easily over your helmet. A collar that is high enough to prevent draft on your neck (for my taste it could have been a bit higher still) deep Napoleon pockets and wide horizontal hip pockets that will fit your hand including your glove if you want. The fifth pocket is for your ski pass, smartly placed on the outside of the upper arm.

As mentioned the pants have ventilation zips on the outside and inside of the leg, and the jacket has vent zips under the armpit. As with most jackets with zips under the armpit, I found these difficult to manage at times, especially zipping up really requires two hands, and if you have a backpack on, the shoulder straps will block the zipper. I would advise Open Wear to see if they can change the placement of these zips in a next iteration of the jacket. 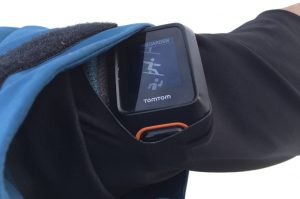 A detail I really loved could be found on the lycra cuff which you can pull over your hand with a thumb loop so that once you put your glove on your hand, wrist and arm is well insulated. In that lycra cuff, Open Wear placed a slit, through which you can still access your smartwatch or GPS on your wrist.

Another smart and simple one is the little key clip in the right leg pocket. A simple solution to not losing your car or hotel keys. 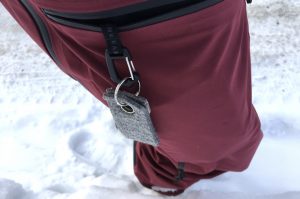 There is a powder skirt available although the review set I received was delivered without. So there were a few but slides I did on icy pistes that delivered copious amounts of snow on my back and down my …. you know, which was uncomfortable and quite chilly, to say the least. So once again, the bib pants would be the best I think.

I like the relaxed and baggy-ish look of the set. It’s casual and snowboardy, without leaving the impression that I was a park-rat or kicker master. It’s a subdued but really classy look I think. We received a blue jacket and “cabernet” – colored pants that, by sheer coincidence almost exactly matched the color of my helmet. So I was really color coordinated on the mountain.

First day on the mountain with the Open One 3-Layer Jacket and Pants by @open_wear. Does the smile say enough? (The ridiculously good and badass Rome SDS Blur snowboard had something to do with that as well!) Have to do a bit more riding, (poor me...🤔😉) and then the review on GearLimits.com and GearLimits.nl. @romesnowboards @romesnowboardsnl @romesnowboards_europe #romesds #romesnowboards #openwear #sustainable #eco #ecofriendly #winter #freeride #snowboard #snowboarding #snow #allmountain #mountains #nature #outdoor #outdoors #getoutside #getoutdoors #stayactive #theoutbound #nature #fun #play #new #review #shred #sendit #piste #fun #love #freeride #reviews

The Open One freeride set really lives up to its promises. It is a well-fitting, comfortable and very complete functional/technical set. There are no unnecessary features to it, it’s not going to make you stand out as far as design is concerned, but at the same time the quality does show. Good weather resistance and breathability. A great set that I would definitely recommend, and with a purchase price that can compete very well with the established brands. Last but not least, I would almost forget: the feeling that you also have a product made from completely recycled materials and that the eco-footprint of this product is very low, is also very nice.