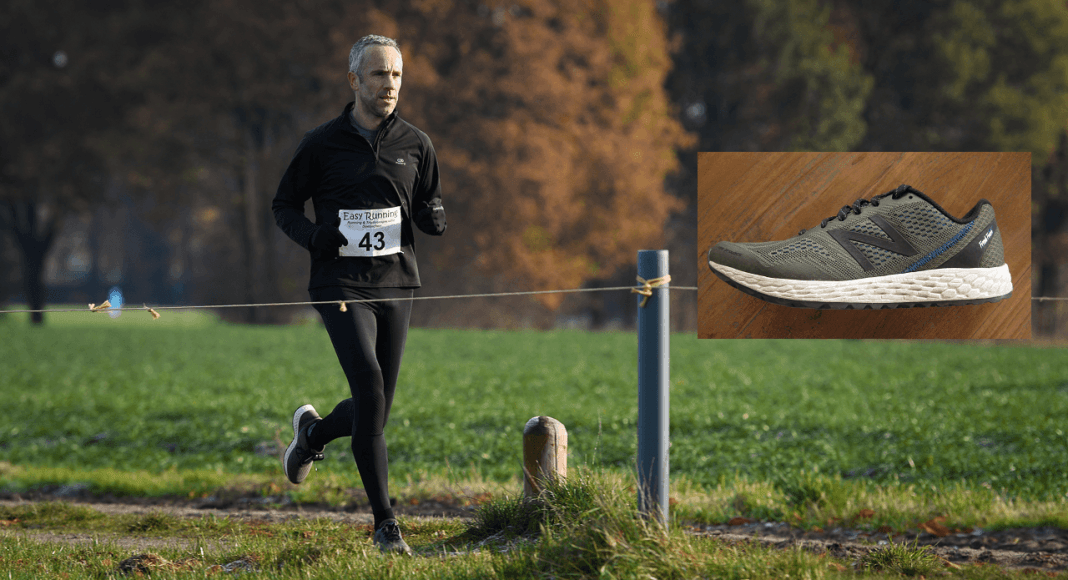 This is not a full shoe-review, but just a short story about why I bought my first pair of trail-running shoes, the inaugural-run, and my high demands towards out-soles.
If you’re only interested in gear babble, feel free to fast-forward to the “Trail Shoe Out-Sole” heading below.

Rudolph & Santa, Ahead of Schedule

Unexpectedly I got to wear a pair of brand new shoes for the LochemTrail on Sunday, November 18th. I´d placed an online order for a pair of New Balance Fresh Foam Gobi Trail v2s, but delivery wasn’t due until the Monday after. So I was happily surprised when my gift to myself arrived at my doorstep a few days early. It was the Friday before, just in time, sort of. Usually I ‘test drive’ my new shoes for at least two 5km training sessions to break them in, if they need to. Also, this period gives me the opportunity to anticipate potential issues, mostly regarding stitch work giving me blisters. No time left for that now!

Thus far I had run all my off-road, cross, and trail runs on all-round trainers, but with the falling leaves and winter season on its way, I thought I needed a specific type of shoe to battle those conditions. Besides, I had a whole bunch of off-road running plans.

Online shopping is risky when it involves shoes, but that turned out fine. Size was good, no pressure points anywhere, combined with a nice snug fit around the heel and mid-foot.

Just walking indoors in new shoes is not nearly as informative as a quick run outside. But first impressions and gut-feeling being very good, I took the ‘plunge’ with the Gobi Trail. 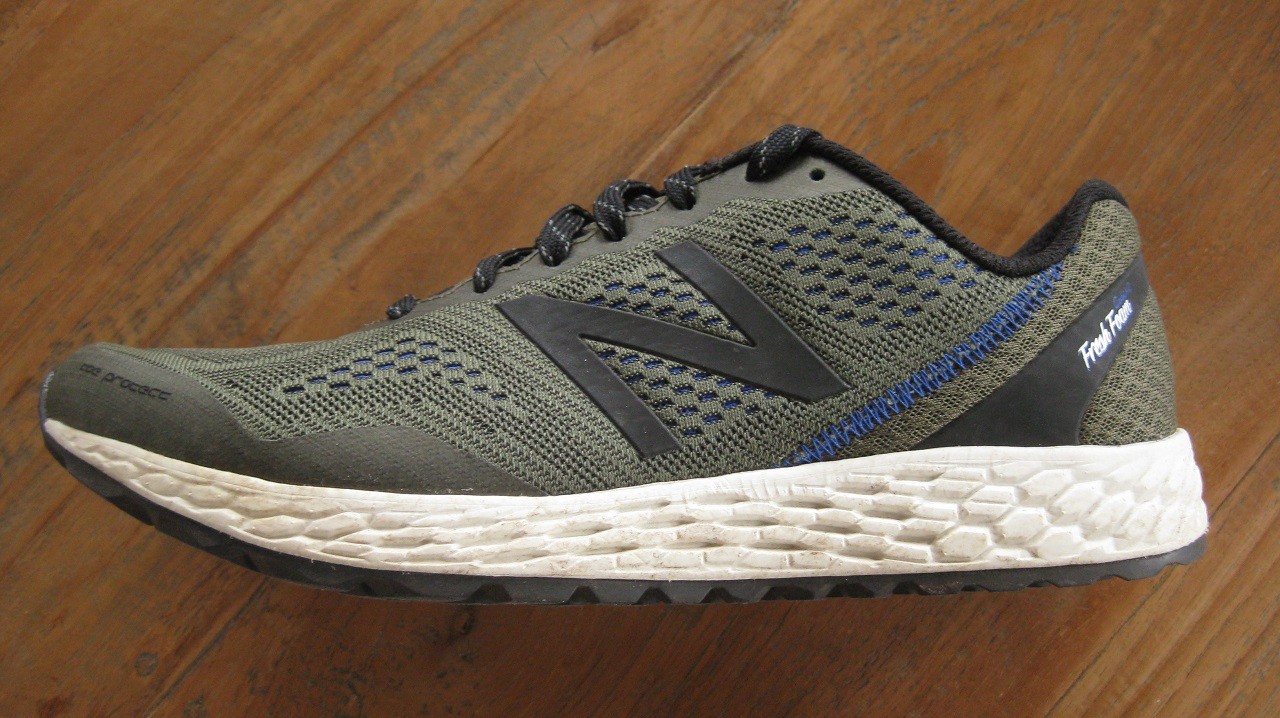 Speeding to the Start Line

On my way to the event I ran into some time trouble. After parking the car, I wanted to do a quick warming-up session, so I jogged to the start. The Gobi felt good. I was counting on that, but still, it was slightly relieving. At the start area I found out that I had to collect my bib elsewhere. It turned out I had passed by the ‘office’ on my way from the car to the start. Hmmm, 5 min left for pick-up. I was running short on time now but I made it.

Now I had another 10 minutes left to prepare for the start: attach the bib to my shirt with 4 opposing safety-pins, a final lace-up of the shoes with a double knot, zip-tie the timing-chip to my left shoe, set my TomTom sports watch, and then hurry to the starting line for the second time. Again, I made it. Phew! I even was able to position myself in the front of the pack to avoid being held up by slower runners on narrower sections of the course. That worked out fine. After the start I only passed a hand full of runners, and half way the race two runners passed me.

Although it doesn’t show in the photo at the top, I did smile a lot during this race. Because of the ever changing circumstances, you have to be extra focused when trail-running as compared to road racing. But the more challenging, meandering and steeper and the trail gets, the more you will smile. It is só much fun!
Well that’s it for the race report, over to the gear talk now. 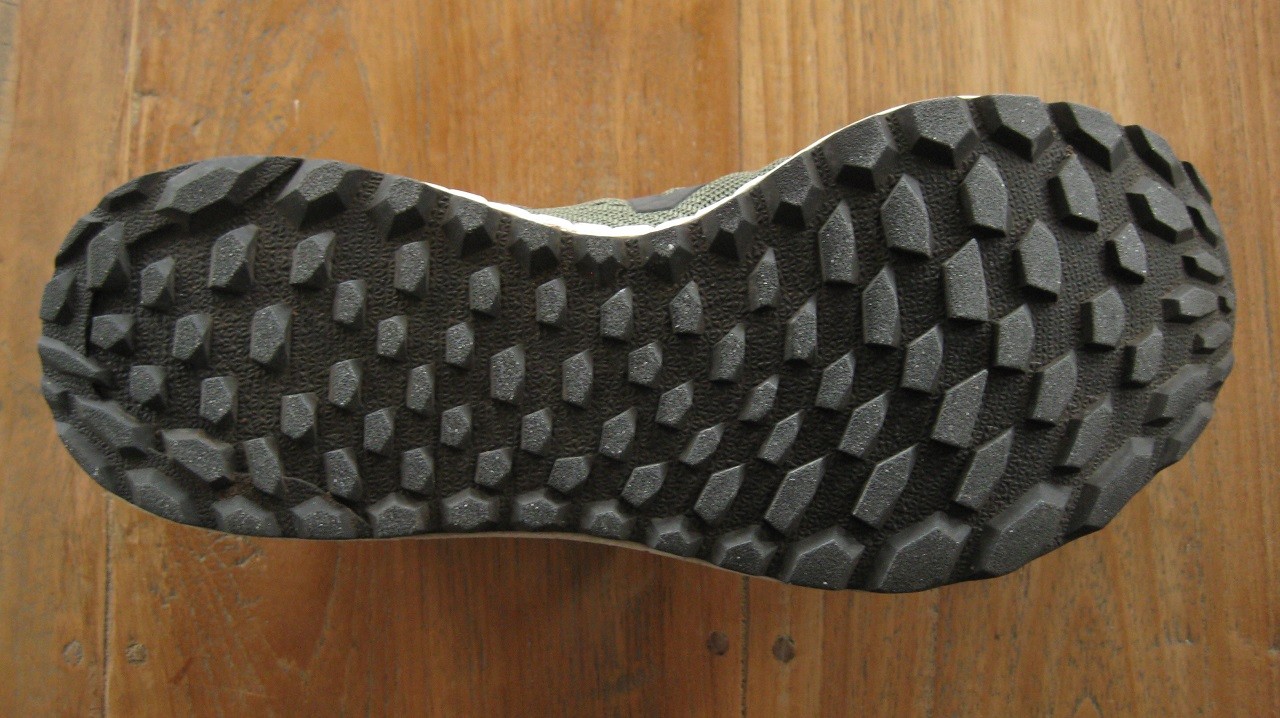 I would classify the Gobi Trail as a semi-trail shoe, because it doesn’t have an integrated rock-plate, plus the out-sole pattern is not as aggressive as on dedicated trail shoes. The Gobi Trail v2 feels just fine on the road but it is not specifically intended for road running. You wouldn’t ride your dirt-bike on the highway for fun would ya? Nevertheless, the lug-pattern is designed to deliver the same feeling as if you’d run on a smooth out-sole, when running on pavement, asphalt or concrete. At first glance it may look quite extreme, but the lug-pattern guarantees a continuous roll-off. From landing to toe-off numerous lugs collaborate and thus provide a smooth ride. For me this is a very important feature because I really hate a segmented roll-off. Moreover I suspect uneven out-soles of causing me injuries. Road running shouldn’t feel as if you were wearing soccer/hockey/football/rugby shoes with six studs each.

For a 100% trail shoe this is not an issue, but the Gobi is a semi-trail shoe, New Balance says it themselves: “The sneaker’s AT TREAD outsole combines both trail and running lug designs to allow for easy transitions between on- and off-road.” I can confirm that this claim holds true.

Let me shortly branch off to road shoes, as I think some models suffer from the same issue, even while they may not have out-soles as extreme looking as the Gobi’s. To clarify, first have a look at the picture below. 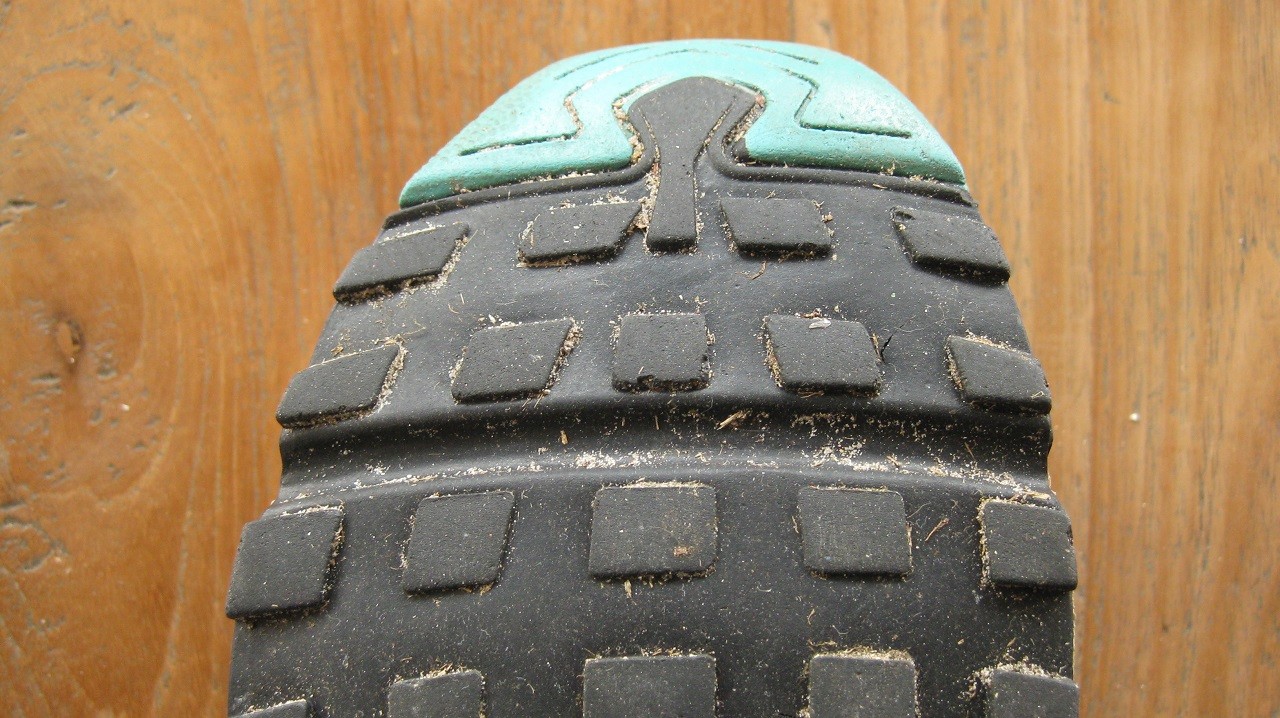 Somewhere in a dark corner I found this +25 year old runner. I have no intent to bash the brand, its just one of many examples of outdated design. The lugs are too perfectly lined up and on top of that a straight groove runs across the full width to increase lateral flexibility. I’m exaggerating here, but these features make you feel as if you’re riding a bike with square wheels.

How to identify this problem? If this story was about mountain-bike tires, it would be easy. Semi-slick mountain tires have a narrow continuous band that runs along the center, combined with knobs on the shoulder. Such a tread pattern provides comfortable straight-ahead rides on asphalt and grip in muddy curves.

Regarding shoes it’s a bit harder to determine if the out-sole design is good. There isn’t a unique characteristic to look for. The easiest way obviously, is to try on the shoes before buying. If that’s not an option, I suggest you look for the following: 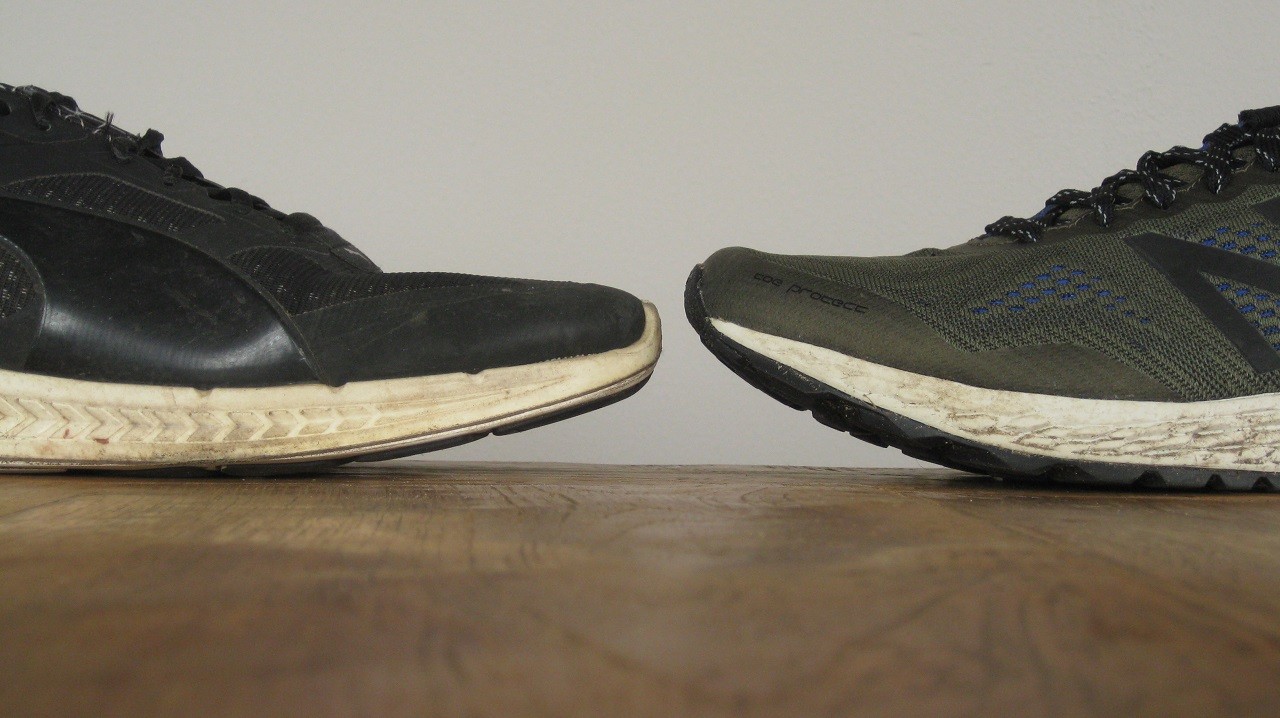 As you can see in the picture above, the Gobi Trail (on the right) has quite a bit more nose rocker than my all-round runner, the Puma IGNITE PWRWARM. Also it’s quite stiff at the front-foot. So I think the two a related, the designers must have put a bit more curve in it, to compensate for rigidity in the front.

Across from side to side the out-sole is convex at the front-foot. This is in contrast with all my all-round trainers that are flat. But on a trail shoe you need more nimbleness. Convexity at the front-foot lets you turn on a dime. The more extreme your trails are, the more you will benefit from a shoe that is eager to turn. Furthermore, a convex platform takes some stress off of the ankle-joint, because when your shoe can easily tilt, the ankle has to bend less. In corners and turns you can lean on either side, you don’t have to place your feet level. And still you’ll have more than enough grip from the lugs.

You will gain the most from this feature in relatively soft terrain. On rocky mountain trails a flat profile across seems more suitable. But if you go mountain-running you don’t want a semi-trail shoe to begin with.

In the photo above I elevated the heel of both shoes to let them rest on the front. It may not seem much but the 3 to 4 mm on both sides of the Gobi on the left have a considerable effect.

I am used to running in shoes with 10-12 mm drop. So I didn’t know what to expect from 6 mm. Would that be too big of a change? Reality surprised me, because I actually didn’t feel any difference. I experienced no extra stress on my calf muscles or increased impact on my achilles tendon whatsoever. Now how could that be?

Of course my old shoes are a bit worn out, they may have lost some of their cushioning and volume. Also the Gobi Trail and the IGNITE PWRWARM are two quite different shoes that diverge on a whole range of characteristics other than the amount of drop. So it may very well be impossible to tell how the amount of drop affects my overall impression. But if you’d ask me I’d say: “it’s the mid-sole material”.

The Puma Ignite® mid-sole is a bit more plush than New Balance Fresh Foam®. So maybe it already compresses a little more, just by standing on it, and therefore the Pumas’ drop doesn’t feel as high as 12mm. Either mid-sole isn’t necessarily better than the other, they’re just different shoes for different terrain.

The lesson I learned is that you can not separate shape, flexibility, cushioning, responsiveness, heel drop etc.. I’m going all Zen here now; you have to take a holistic view when it comes to comparing a shoe, don’t just look at individual specs.

After barely 25 km of testing I can say that the Gobi performs really good on the trails. In addition to that, they are very comfortable on the road as well. It’s a good compromise with just a few downsides.
So don’t forget, you don’t wanna use these on the road all-the-time. You have less square centimeters of rubber touching the road because of the lug pattern, which leads you to have considerably less grip than you would in a road shoe, especially when it’s wet outside. Also the convexity of the out-sole is detrimental to grip and stability on hard surfaces.
And most important, lugs wear down much faster on the road than continuous soles do. So keep ‘em dirty!!! 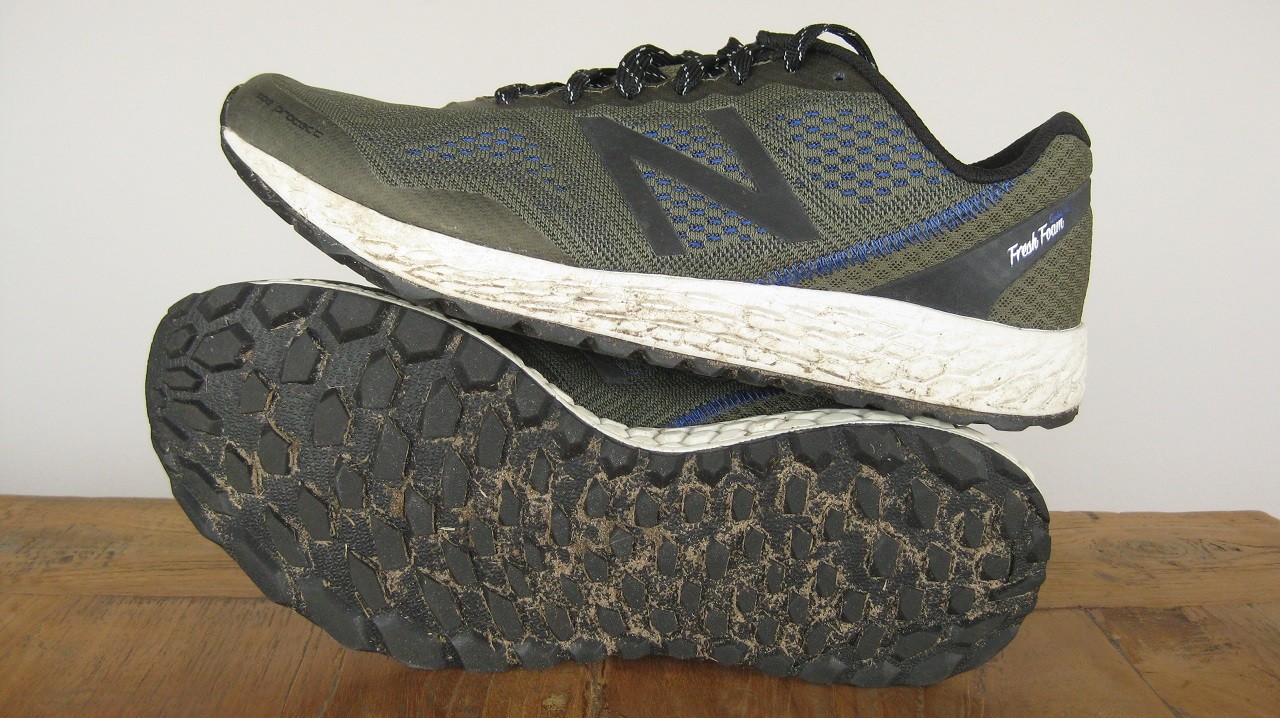 Although the successor of my shoe, the Gobi Trail v3 is already available, you can also still put your hands on a pair of v2’s:

I was not stimulated, sponsored or paid for by any brand or organization to create this post. All texts and photo’s are mine unless credited otherwise. 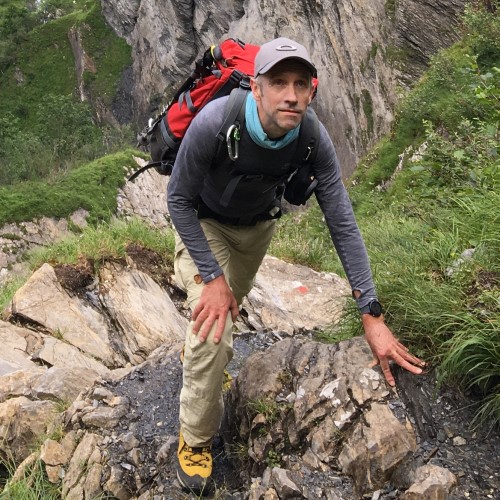 Although I do not own a Thule backpack I do wanna tell you about a couple of their new packs...