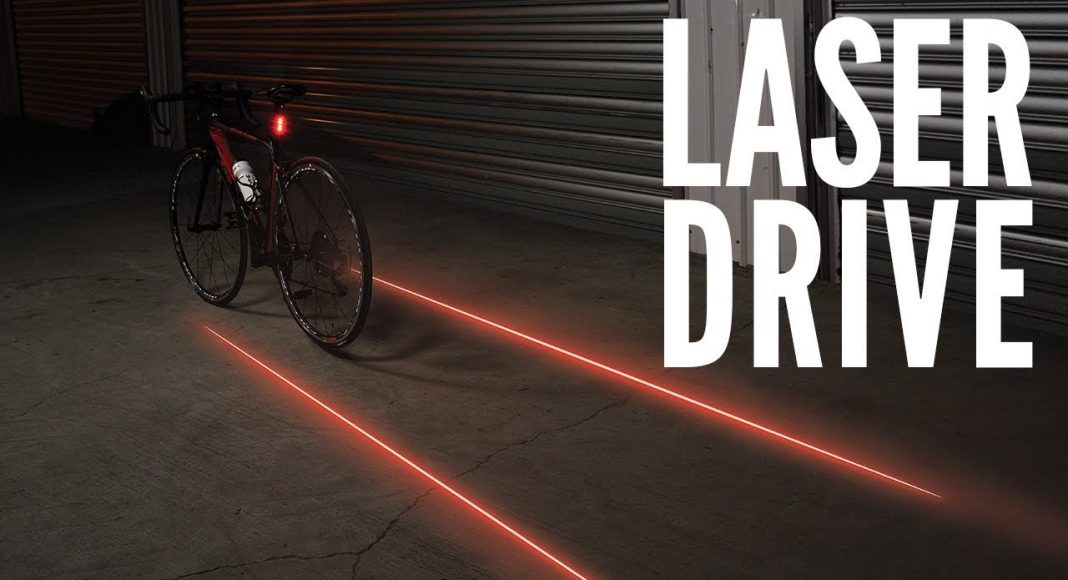 We tested the products during a MTB nightride in the woods, and during normal commuter bike rides in the dark.

The rear light in this review is a very cool and special item. This rear light is actually equipped with real laser that beams a red stripe on the ground on both sides of the bike. These red stripes run, both half a meter left and right next to your bike, from the front of your front wheel, to about 2 meters behind the bike. This looks really bizarre cool and spaceship-like, but must also be very functional and safe. The bicycle is in fact very visible, not only from behind but actually all around.

The rear light is easy to attach to the seatpost of your bike with a silicone strap that is mounted around the seat post. The strap is not fixed to the rear light, but you need to attach on both sides to 2 plastic hooks. Assembling is very simple, but the first time I was  assembling it, it was obviously dark and I was pretty clumsy attaching it. Then the strap fell to the ground and I had to search in the dark to find it again. So attach the light during the day, that saves you a hassle.

The lamp and its settings

The lamp has one button with which you can operate it. This is on top and is easily accessible, even for people with thick fingers. With this button you can set both the lamp and the laser in the different positions, but also set the strength of the lamp and laser. There are different combinations of only rear light (in 9 different flashing and non-flashing modes), only laser or a combination of tail light and laser. Never look in the laser with your eyes, because that can be really harmful. Also the rear light is very bright in its brightest position, especially when it flashes, so you better not look straight in it. The lamp automatically remembers which setting you used the last time, so if you turn it on it will start on this position. That is useful, because my experience is that I always used the same modes (back light and laser beams continuously on, at the least bright mode). The lamp is charged via a USB cable which takes about 3 to 4 hours. This charging is done via a port on the back that is about 1.5 cm deep in the housing of the lamp, Which can be frustrated when having thicker fingers. The port is sealed with a silicone seal that makes the lamp waterproof. With a full battery you can travel 2.5 till about 17 hours, depending on the position and intensity of your use. When the light is off you can see the current battery life via a touch on the  button, which triggers an indicator light just above the 4 LED lights. If the indicator light is green, it means 100%, red / green is 50% and red means another 30% battery. When the indicator light flashes red you still have 10% battery, so you can better hang it on the USB.

Cycling with the lamp

The first time I used the lamp, we did a MTB night ride with a larger group of MTB people. It was very dark and the rear light was on (there was no flashing) and the laser beams were on. Soon I heard from my MTB crew that the lamp was too bright and that they were blinded. Then I put the lamp back in strength / intensity two positions. Yet I got complaints of my crew because they found the beamed laser was annoying on the curvy single tracks where we were driving at that moment. So I turned off the lamp and the laser. Later I used the lamp more often during commuting. I think the lamp is intended for this purpose; because here he comes to his right! I have never received as many comments as with this lamp. You also see a lot of cyclists and motorists watching because it looks very bizarre with the red laser stripes. The visibility at night is amazing, which gives a very safe feeling in the dark. You also notice that when people overtake you (which happens rarely :-)), they take more distance because of the red lines on the road. With those stripes you claim the space on the road you need and where other road users have to stay out.

The Lezyne Laser Drive taillight is a very nice and functional rear light for the bike. Anyone who regularly cycles in the dark (as long as it is not a single track MTB) should use this lamp because it increases visibility and therefore safety. In addition, the laser beams ensure that other road users give you more space. The lamp is simple to attach, but do it when it is light, that saves a hassle. Furthermore, I would not use the lamp in its brightest position, because that is very very bright. That way he also goes the longest without charging, up to 17 hours!

The great thing about sleeping in a tent is that you can basically sleep anywhere you want, at least if...
Read
Pants

The Swedish brand Fjällräven has been known for years for its functional clothing. Clothing that is designed to explore nature,...
Read

Can a separate GPS bike computer do more or do better than the apps that you can download on your...
Read more
Advertisment