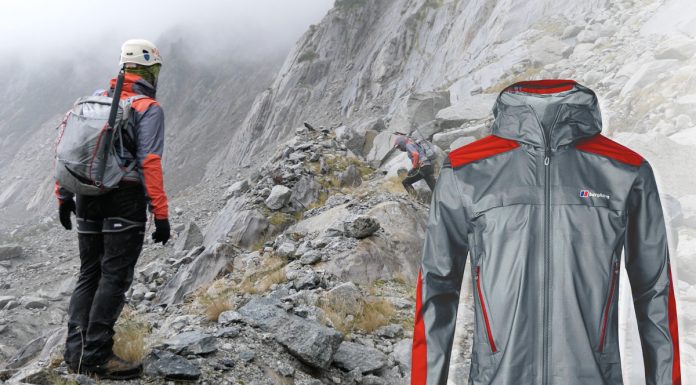 I’ve been patiently/not so patiently been waiting for the moment that I could share this review with you. I have had the GR20 Stromjacket a number of months now, and for the first and most intensive time I used it, we have to go back a few to October last year, when we joined Berghaus for a Weekend Alpine Adventure. Together with Berghaus guide Pierre deWit we went to Chamonix where we met four Belgian prize winners of a competition Berghaus had run during the Belgian Banff Film Festival. 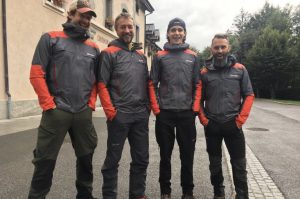 Berghaus had commissioned us to make a film of this mountain adventure, and at the same time, it proved to be an excellent opportunity to test the GR-20. After our really, really good experience with the Hyper 100 jacket, I was looking forward to seeing what the GR20 Stormjacket was all about. Besides myself, Pierre and the two male prize-winners all wore the GR20 jacket.

The promise of the jacket was/is fairly simple. Three layers, lightweight, Highly breathable, completely wind and waterproof. The cool thing I thought that it tries to accomplish that in a combination of high-tech and low-tech yet still really effective measures. The High-tech is in the application of the Gore-Tex active membrane and a hyper breathable face fabric by Berghaus.

The “low-tech” is in a patented system of simple vents in the jacket. Along the front and back of the jacket, Berghaus has left the fabric completely open, ensure heat can escape unrestrictedly. And to make sure that water doesn’t come in through these vents, they came with a fairly simple solution and that was to fold over the edge of the vent. Simple, elegant and really effective I would notice. The jacket is 279 grams in a size Large, so really lightweight as well. It is a jacket specifically designed for men.

So that was the cool part of our Weekend Alpine Adventure: the first day on the Mer de Glace near Chamonix we had amazingly dreadful weather. It was about 5 degrees Celsius, and the day began really cloudy. As we went up the alongside the Glacier it began to rain and the rain came down with strong winds for at least 3 hours at end. During this time the team scrambled along the rocks and boulders and in the end, did a Via Ferrata ascent of about 250 meters. As I found myself standing on the sheer vertical wall, wind and rain driving at us, holding on with chilled hands I took a moment to notice how completely dry my upper body was in contrast to my hands and legs. Only my feet in really good mountaineering boots were also dry. 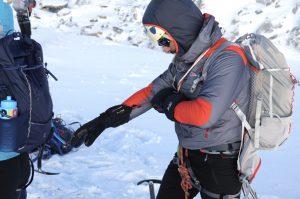 The second day brought us to the Italian Courmayeur side of the border where we took the gondola up to the Glacier du Geant. There the team attempted to summit the Aiguille de Toules, only to be blocked by a large crevasse in the glacier. At the beginning of the day we had low temperatures, primarily because of the strong winds, but also when the wind died down it was well below zero. Below the GR-20 I wore a heavy merino mid-layer and a merino baselayer, and this combination added to the fact that I was active many hours in a row, kept me well warm throughout. 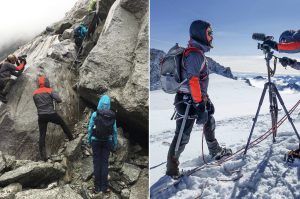 Throughout these two days I was not only climbing but also filming the team, which means carrying equipment, covering a bit more distance, getting into uncomfortable positions in many cases, trying to keep the camera equipment dry, and filming during rappels and the Via Ferrata. So there was quite a bit of physical work and I was just delighted by the performance of the jacket.

On that extremely wet first day it kept me completely dry from the outside, on the second cold day at altitude, I was kept warm, not bothered by transpiration or getting wet from the inside. Obviously, in both cases, it is critical to match your mid and baselayers to the shell and the three layers really complemented each other. 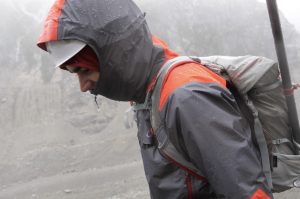 Feature-wise the jacket is very simple. It has two hip pockets, the hood which fits easily over a helmet can be adjusted from one point with one hand and what I particularly liked where the cuffs where the top of the cuff that falls over your hand is slightly longer than the bottom (wrist-side) of the cuff that fits snugly over your hand or gloves. 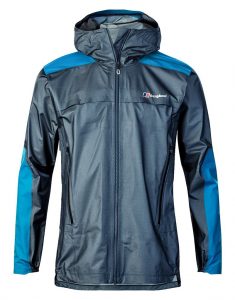 The grey on the jacket has a silver/metallic effect to it, which you have to like. I did. With the red contrasting areas on shoulders, hood and arms and the tight cut I think the jacket looks really well. The jacket can also be had in grey and blue.

Since the Alpine Weekend I have used the jacket while running, mountain biking and just in daily life and it continues to make me happy. It is just a very versatile, very protective piece of kit that I would always take with me when I am sure to be getting active in challenging weather circumstances. It’s just a really great piece of kit.

Previous articleRuby just might be the mother of all trail dogs!
Next articleGearBite: the lightweight Jetboil MicroMo for cooking, whatever the weather does