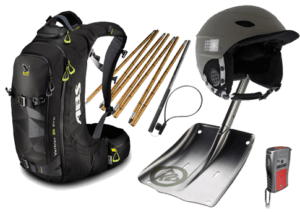 Off-piste skiing and snowboarding are becoming increasingly popular. The appeal of fresh, untouched snow is enormous. But the risk in once you go outbound is also greater. Unfortunately every year, numerous winter sport enthusiasts are killed in the mountains. Research has shown that about 95% of accidents are caused by an avalanche that the skier or boarder himself triggered. Never go off-piste in

The mountains are beautiful but dangerous. The only thing you can do is minimize risk. Before going outbound, always check the local avalanche risk forecast, know the necessary safety procedures for riding outbound in groups. And, never, no matter how advanced (you think) you are, go off-piste in high alpine area without essential avalanche safety gear.

But before checking out the gear, be sure to read about the avalanche risk level warnings and how this works.

In the Alps special avalanche safety teams are active. They teach courses and publish daily avalanche bulletins. They indicate avalanche risk with levels 1 through 5. But the level does not say everything. In addition, factors like the steepness of a slope, snow drifts, temperature, sun, time of day and orientation of a slope are, micro level also of impact on avalanche risk. In addition, your own behavior, level and equipment play a major part in your safety.

Wind or snow plaques only occur at with a lot of pressure on steep slopes (for example, by large groups of skiers). Spontaneous avalanches occur hardly or not at all.

The snow has set only moderately on some slopes. Large groups of skiers can trigger avalanches. In steep terrain, avalanches can also be caused by an individual skier. Small spontaneous avalanches occur in spring.

The snow has set badly on many slopes (avalanche warning!). Avalanches can be caused by individual skiers and it is even possible to trigger an avalanche from the foot of the mountain. Larger spontaneous avalanches can then occur.

Acute danger. The snow has fallen on all slopes, and large avalanches come down spontaneously. Never go outside the listed pistes!