GearBite: running and fitness shoes with graphene, the Inov-8 G-series 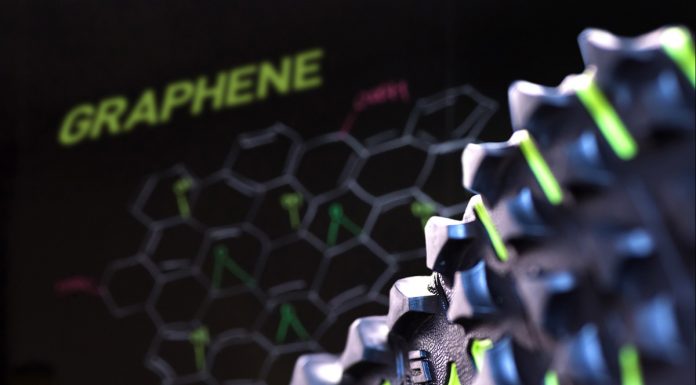 Inov-8 works together with the University of Manchester to become the very first company to process graphene in running and fitness shoes. Graphene is the thinnest material on earth and is 200 times stronger than steel. It was first isolated by the University of Manchester in 2004 and is the world’s first two-dimensional material with a thickness of only one atom. Graphene has the potential to revolutionise a large number of technological areas. Laboratory tests have shown that the rubber outsoles of these shoes are stronger, stretchier and more wear-resistant.

Michael Price, director of Inov-8 product and marketing: “Off-road runners and fitness athletes live in the sporting extreme and need the best outsole grip to optimise their performance, both while walking on wet trails and while exercising in sweaty gyms. For too long they have had to compromise this need for grip with the knowledge that such rubber wears out quickly.

“Now, with the breakthrough properties of graphene, there’s no compromise, and the new rubber we’ve developed with the National Graphene Institute at the University of Manchester allows us to break the limits of grip. -Series shoes offer a combination of traction, stretch and durability that has never been seen in sports shoes before, making 2018 the year of the world’s best grip. “

Graphene is produced from graphite, which was extracted more than 450 years ago in lakes in the Lake District in northern England. The Inov-8 brand was also founded here, albeit much more recently, in 2003. The brand now operates in 68 countries around the world.

Inov-8 CEO Ian Bailey on collaboration and patented technology: “Product innovation is the top priority for our brand – the only way we can compete with major sports brands – the pioneering collaboration between Inov-8 and the University of Manchester puts us at the forefront of a revolution in graphite sports footwear, and this is just the beginning, because the potential of graphene is truly unlimited, and we are so excited to see where this journey will take us. ”

The scientists who first isolated graphene received the Nobel Prize in physics in 2010. Building on their revolutionary work, the team at the University of Manchester has done pioneering work in projects with graphene-enhanced sports cars, medical equipment and aircraft. Now the university can add sports footwear to its list of world premieres.

Dr Aravind Vijayaraghavan, Professor of Nanomaterials at the University of Manchester: “Although graphene is the thinnest material in the world, graphene is also the strongest and at least 200 times stronger than steel, it is also extremely flexible and can be bent, turned, folded and stretched without causing damage.

“When added to the rubber used in G-Series shoes from Inov-8, graphene gives all its properties, including its strength.Our unique composition makes these outsoles 50% stronger, 50% more stretchable and 50% better Resistant to wear and tear, the graphene-reinforced rubber can bend and grip more effectively on all surfaces, without the need to wear quickly, providing a reliable, strong and long-lasting grip, a revolutionary consumer product that will have a huge impact on the sportswear market. “

[vc_gallery interval=”5″ images=”23192,23190″ img_size=”full”]
Previous articleGearBite: the lightweight Jetboil MicroMo for cooking, whatever the weather does
Next articleGearBite: The Fällkniven F1 PRO, the survival knife of the Swedish Air Force

The Norwegian sportswear brand Odlo comes with a new spring 2020 collection. In times of COVID-19 hiking is a nice...
Read more
Advertisment