This post was originally done in june 2017. But we just love this trip so much we had to share it with you again.

At GearLimits we want to know everything about outdoor products and get to know the ideas and the people behind the brands. Jeffry is a “Friend of Haglöfs” but also a professional Wilderness Guide, International Mountain Leader, Adventurer, Photographer and in winter months is a musher at Beito Husky Tours.

Together with Jeffry, we went on a two-day hike. With the two Huskies Chewy and Lilemu, he took us into the Scandinavian Wilderness, into his world.

The hop over to Beito was a quick one, from Amsterdam to Stockholm where we were greeted by Niklas, the owner of Beito Husky Tours. A 4-hour drive North brought us through just a beautifully lush and green landscape. As we commented on that Jeffry told us that the wilderness we would be heading into would be slightly less lush and green, and a bit more barren and Arctic. Six weeks earlier Jeffry had been driving clients of Beito Husky Tours on dogsleds through the snow covered landscape.

That is one of the very cool things Jeffry does as a professional. Besides being a musher he is a professional guide, certified as International Mountain Leader, Canadian Certified Wilderness, Wilderness First Responder and has worked for National Geographic as a photographer. This is a man who has seen the world, and then some. The stories he tells are amazing, from staring down a male lion through the zip of his tent, till being almost lost in snowdrifts with a team of dogs.

We enjoyed our time with Jeffry immensely. He is just a very kind and humorous and modest guy, very skilled in the outdoors, a great story teller and you just feel the love he has for the wild place he has travelled. And what’s more, if there is any person we have met that really knows what the demands on outdoor gear are, then Jeffry is the one. That gave us an excellent opportunity, not only to go on this cool little adventure but also to find out why he choose to become a “Friend of Haglöfs.” (similar to being ambassador for the brand). For more about Jeffry, check out Jeffry’s website.

For Jeffry, it was the huge commitment to purpose made garments. In his work, he needs functional wear, though we did notice he has a sharp eye for colours and aesthetics of gear. Not a surprise there; as a photographer he would have a sharp eye for what looks good. But functionality is paramount; Jeffry is not looking for any “stupid” additions that do not work towards a purpose. That was his main reason for choosing Haglöfs. He emphasised the quality, functionality, design: what Scandinavian products are generally known for and the Swedish Haglöfs delivers on every one of those, according to Jeffry.

Seeing as we never want to take people by their word too much when it comes to gear, and that we would rather let the gear do the talking, we had asked Haglöfs to provide us with some gear so that we could experience these qualities ourselves. Hayco and I were both provided with The Rugged II Mountain pants and Haglöfs Oxo GT boots. As shells, we wore two Spitz and Heracles jackets, and two backpacks (the NEJD 55 and Röse 65) completed the package we were reviewing. All the links lead to Geartalks and reviews on the products. Spoiler alert: we were quite pleased with the performance of the gear.

The cherry on top of our outdoor cake where the Huskies. We heard them barking and howling as we arrived, a kennel of fifty dogs that you would never dare to enter without the calm reassurance of a guy like Jeffry. My initial reaction to the dogs that were chained up in pairs beside a doghouse per two dogs, was to assume these would be aggressive dogs, frustrated from being chained up. But the contrary was true, they were overjoyed to see Jeffry, obviously, he knew them well. But also to us, complete strangers they were so sweet and enthusiastic. Not a sign of frustration or aggression at all. When they were let off the chain before heading to their night bunks, they were just happy playful dogs. No rushes for freedom or unwillingness to be locked down in their bunks for the night. Really amazing. And although I still would prefer to see dogs running around freely I really got the sense the dogs were well taken care of and loved by Niklas and his people. 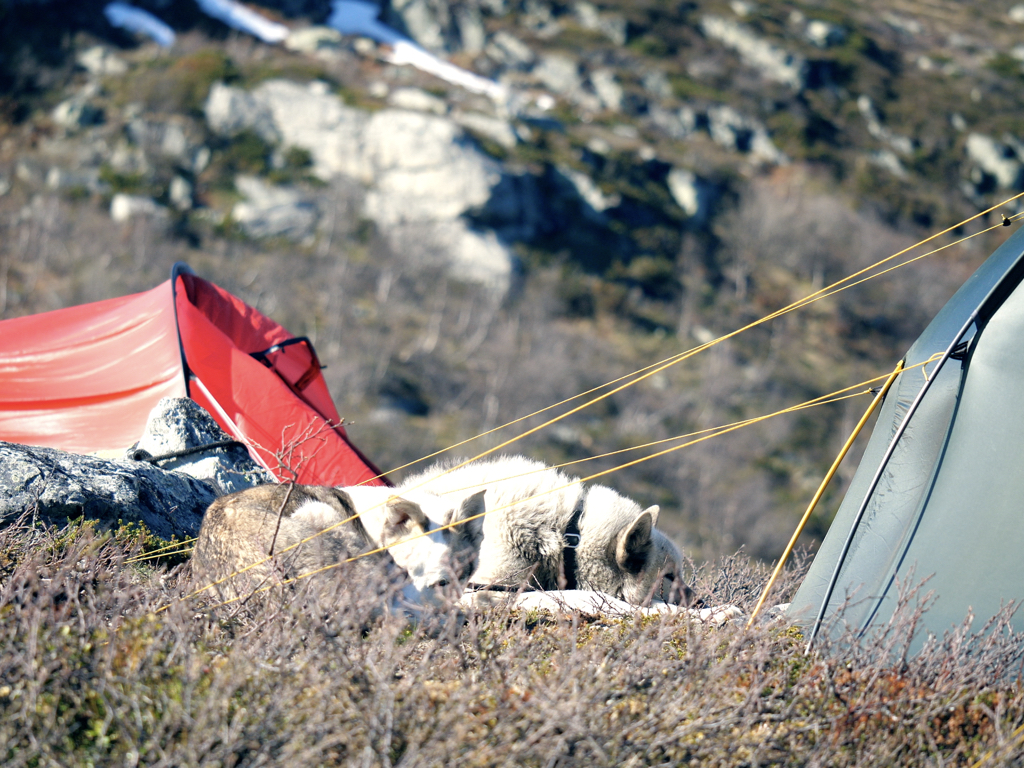 We decided to take two dogs along on our hike: and choose for the wolf-like Chewy and the girl with the beautiful blue eyes Lilemu. Unfortunately, we had to keep them on a leash because the moose in the area would be having calves in this season. But the dogs were happy and content walking on the leash, it gave them something to pull (obviously what they have been bred for). And they were great company, cuddling up as we rested, watching our drone with apprehension and even catching and eating a clueless lemming once. 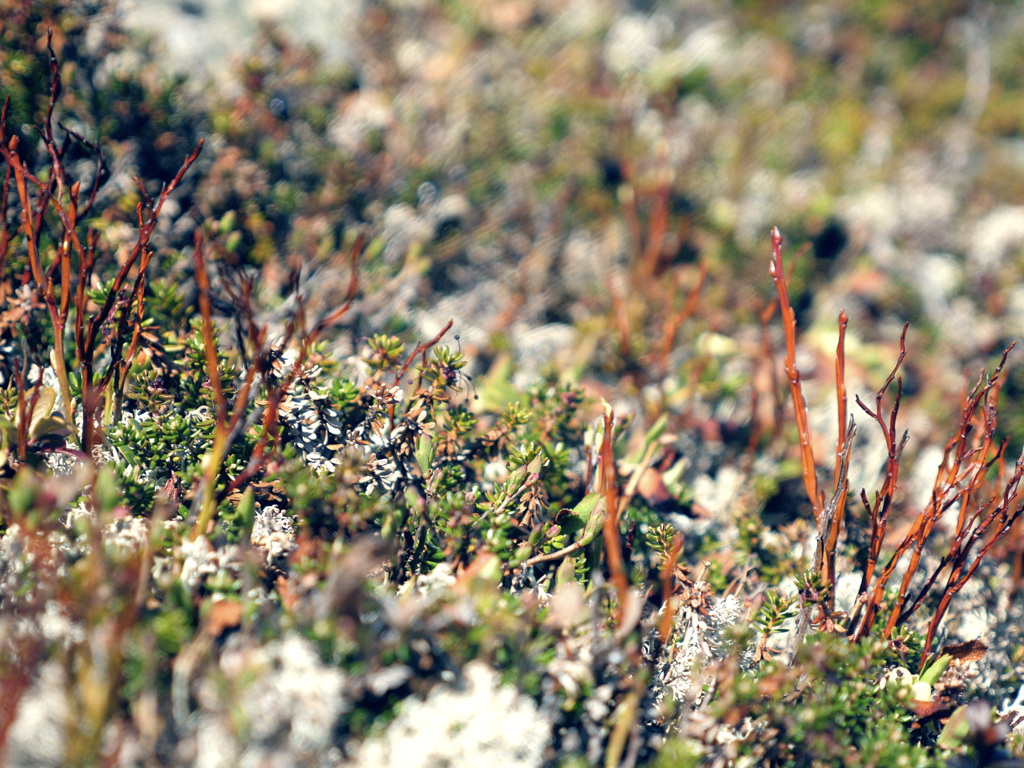 The five of us spent two days in a landscape that was in full metamorphoses. The turning of the season is a wondrous thing when you can see nature exploding with life. A barren but far from empty or dead landscape. So many mosses just emerging from the snow they had been covered with for months, blooming heather, birch trees in a green sheen of young buds. It is just very, very beautiful. And as Jeffry said: Hiking is perhaps the most intense way of experiencing a landscape. Because you move more slowly, you notice more, you experience more.

That is what we tried to capture in our film: the grandness of the landscape, in all it’s huge and vast vista’s, and the square inches of teeming life beneath your feet. We hope you enjoy it!