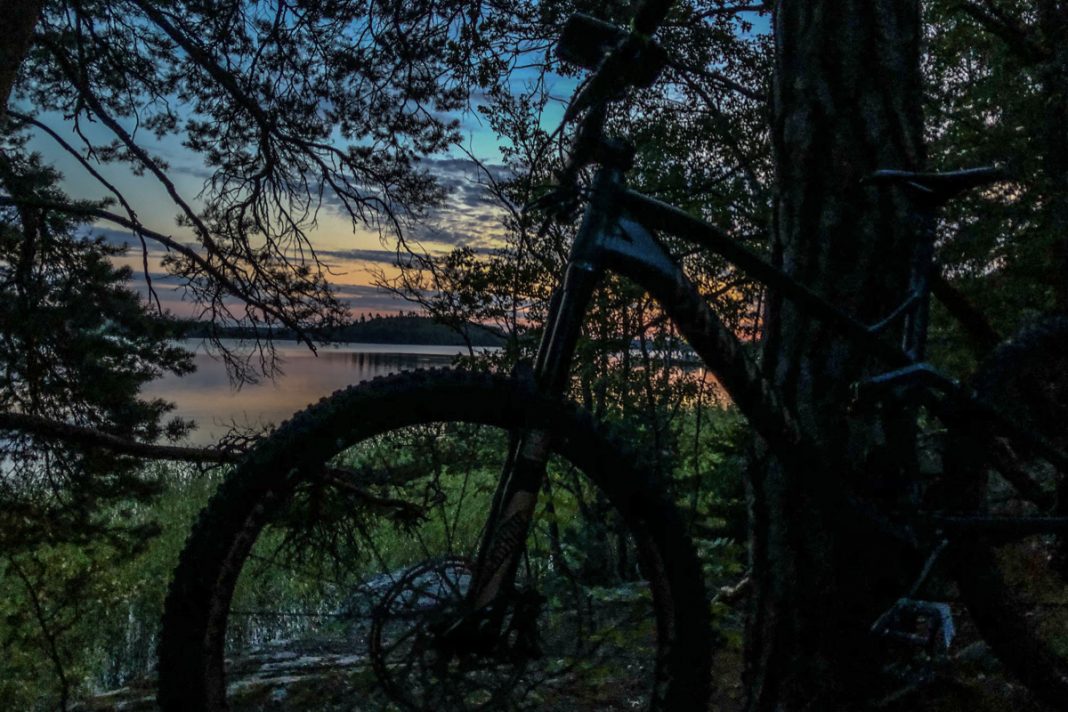 It is a moment when all colors fade into soft pastel versions of themselves. The sharp lines that frame, define, imprison objects within their own boundaries during the day slowly melt away. Trees and fields merge into abstract color planes, stones around me are bright spots in the dark loamy ground, the trail an almost luminous ribbon through darkening forests. It is a beautiful moment that everything becomes soft and quiet and dreamy, except for the sound of the bikes’ cassette, the studs of my tires on the stones, the rattling of my bicycle when I pass small rock gardens.

In my head, it is just as dreamlike, just as much flow. This is so wonderful, I’m in the zone as I have seldom been before. I am so at one with my bike. My own Canyon Spectral from 2016, which I know so well, 140mm travel, 27.5 inches, just right for what I want to do here, fast and agile, … so good. And when I ride out of the forest and through fields, I look back, I don’t know why maybe I felt them more than anything else; two moose looking at me from the edge of the forest. I let my bike roll out, I stand still, and keep watching them at a respectful distance. They look back, curious, waiting, unmoving. Two heads appear among the grain, roe deer, a small roebuck standing in front. It is very quiet.

I am 20 minutes away from Bromma, a suburb of Stockholm. On vacation with my family, we spent the whole day in this beautiful capital of Sweden. During the day we were east of the center of Stockholm, on the island of Waxholm, one of the 20,000 islands of the Stockholm archipelago. A place you just have to visit.

With just under an hour and a half before the sun sets, I am now on an island again, this time to the west of the city, which is actually built on a collection of islands. The island where I am now is called Lovön, and the route that I ride is not an officially marked trail, but a route that I found via the View Ranger app. The trail is not always clear, so it is also good to keep an eye on the route that I have on my Landrover phone.

I’ve started at Drottningholm, the private residence of the Swedish royal family. A huge complex with extensive gardens and park area. When I ride five minutes further and the route leads up a small hill, I find myself away from everything, smack dab in that beautiful Swedish forest that I have learned to appreciate so much in a short time. Among the pine trees here also a lot of birch and beech trees, a roll over rocky terrain that immediately makes my bike’s suspension smile. I ride the route counterclockwise, and it really is a great route, up and down, up steep steep climbs, and sharp challenging technical descents. Nothing very long, but so beautiful and with so much variation that it almost feels like a really dynamic flow trail, except one with boulders, rocks and roots. It makes me so happy. It requires a lot from my riding technique, which I love!

The island feels a bit like a bowl, where the higher edges are where the rocks and forests can be found I am riding through, and in the centre “fields of gold” as Sting would say, with mostly grain. Here and there I verge off the trail, combining some other paths into the route that I eventually ride. Especially because I don’t want to be caught out after dark in the forest I don’t know. I only have a camping head lamp with me and I do think it will get really dark here. Here and there I come across the most idyllically situated houses, all beautifully maintained, sometimes a few of them together join together to form charming little hamlets that are just as beautiful and a peaceful part of the scenery.

After the first moose encounter, I later come across a couple when it is almost dark. And in the meantime, I have come across fifteen roedeer. Two pop up next to me as I drive along a path between two grain fields; they look at me in surprise, at a distance of two meters, and then they fly away into the grain, bounding in large arched bounces. Later a badger shoots away off the trail as my tires approach, hares and squirrels, buzzards and eagles. The only things I don’t come across are people, I am completely alone with the trees, the rocks, the animals and my bike.

Only at the end of my ride, when it almost gets too dark to go on, do I come across the ugliness of “civilization” again; a stretched-out construction project, I think a pipeline, that the trail skirts a few times, I think a pipeline. A brightly lit, long building site from which I like to stay. The night has really fallen, so I decide to abandon the rest of the route that View Ranger indicates and I ride back over the road to Drottningholm and from there back. I’m worried for a moment about my lack of lighting, but I actually ride the whole part on wide bike paths seperate from the road, back to our vacation address.

And all the time I have a smile on my face that just cannot be wiped off. It has been such a fantastic ride, the natural beauty, the trees, the boulders, the skies, the animals and those houses and hamlets. It is so idyllic, so peaceful and yet so accessible. A day later I also do part of the route with the Cube Stereo Hybrid that I also have with me to film some footage for the upcoming videoreview. That too with a big smile.

That smile however suddenly dies away in the night after the ride with the Cube Stereo Hybrid, when both bikes are stolen. A huge damper to the joy of riding in this beautiful place. It’s intolerably frustrating that people still can’t keep their hands off other people’s things. Even in a country like Sweden, where you don’t expect that to happen.

So in more than one way it was a “sunset ride” for me and my bike. The sun went down on my time with my own lovely familiar Canyon Spectral. A wonderful bike that I will miss enormously. Maybe the bike thieves have taken that bike, but all the memories I have built up with that bike, of rides in the Pyrenees, Alps, Ardennes, Texel, at home on the Utrechtse Heuvelrug and that beautiful ride on Lovön; I take those with me on all subsequent journeys.

And the realization that I am the happiest on this type of trail, and this type of ride. Alone on an adventure through the woods, riding over rocks & roots. With generous travel on my suspension and power and energy in my bodyl powered by the beuaty of nature and sheer stoke. With a bike that I trust, that moves with me and with which I am completely in balance. I can’t wait until the next time I can do such a ride with such a bike.