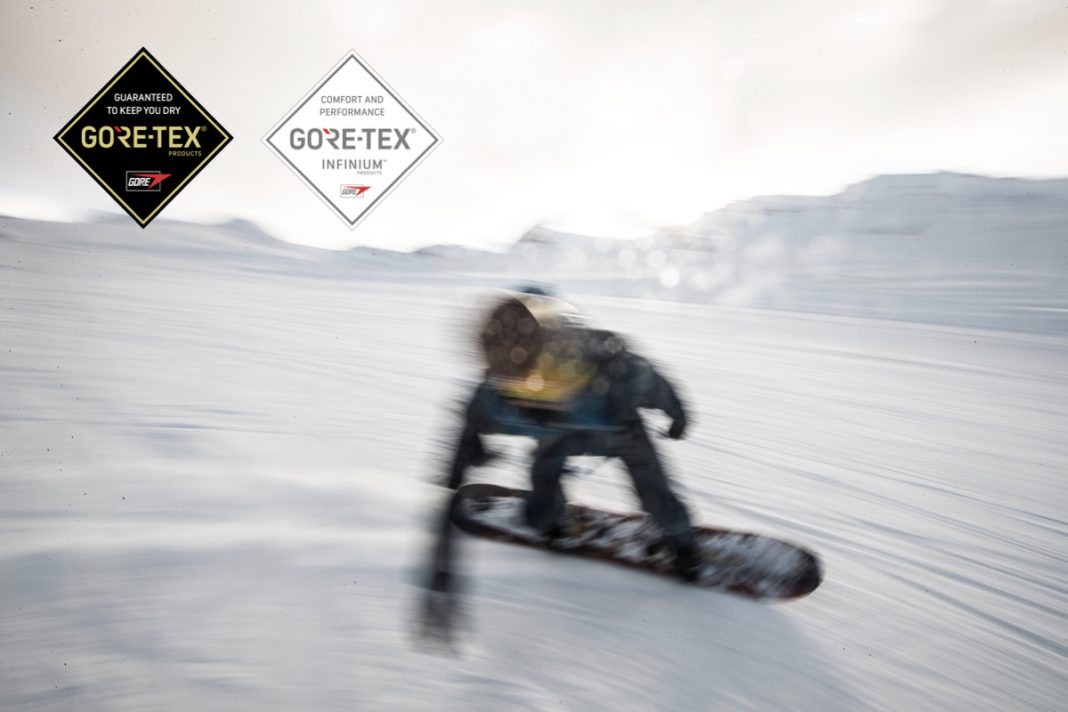 In October 2018 we attended the Gore-Tex Brand Snowsports Experience. Last week we published part 1 of our report,  on Waterproofness, PFC-EC Free DWR coatings and more.

In this 2nd part, we look at Gore-Tex’s new Infinium brand, share a mini gear review with you, and meet Stefan Glowacz.

More than anything else, Gore-Tex is really a garment technology company. Through extensive lab -and statistically relevant field testing and research they keep looking for the best solutions for the end users of the products. The interesting step Gore-Tex has taken this year is to bring a new brand to market: Gore-Tex Infinium. This “brand-extension” as they call it, brings them beyond their world of waterproofness; which is also the world their customers know them for.

The reason for that is that Gore-Tex came upon many technologies (for example on breathability and windproofness) that went further than waterproofness only. And subsequently brought Gore-Tex to a world of “comfort beyond waterproofness”. But to just add those technologies to a brand which primary identity is being waterproof, could muddy those waters so to speak. To make a distinction between those two group of products Gore-Tex Infinium was introduced.

Where the black diamond of Gore-Tex has always been about that “guaranteed to keep you dry”, the white diamond of Gore-Tex Infinium is about Comfort and Performance and when these take priority over waterproofness. Because it doesn’t always rain and there is a huge area of application for breathable, warm, comfortable sportswear.

With this step Gore-Tex has entered a new market, bringing new ingredients that even have an application in urban environments. But it also takes a step away from what Gore-Tex has been synonymous to, which is waterproofness. During the seminar about their brand-extension, there was a broad discussion on how end -consumers would react to this step if it the distinction between the black and white diamonds would be clear enough? Would the waters be muddied anyway, or would the quality that Gore-Tex stands for and which it has established through it’s “Guaranteed to keep you Dry” promise, spill over to its Gore-Tex Infinium products? Only time will answer those questions.

New products where Gore-Tex Infinium is applied are already on the market, examples are the Norrøna Lyngen Infinium down850 Hood Jacket, Running tights by Salomon, Procline Camp Jacket’s by Arc’teryx and Woven Jogger pants by Under Armour.

The event was also about the experience, experiencing gear with Gore-Tex ingredients in it, on the slopes of Kaprun. I chose the Norrøna Røldal Jacket and Pants, a freeride oriented set. A three-layer jacket with a recycled polyamide C-knit backer fabric. C-knit is a “backer construction made of an extremely fine nylon circular knit fabric and a lamination procedure specifically engineered to complement this construction.” and is supposed to increase breathability and have a softer feel.

Now comparing breathability from one jacket to another in the field, to me is all but impossible. There are so many variables, your own physic, the activity you are doing and intensity of it, the outside temperature, what other layers you are wearing…and so on.

I can tell you that during snowboarding, climbing and skiing (which I did for the first time),  with temperatures well above zero, wearing a Löffler Transtex base layer and light Mons Royal Merino mid layer, I felt no excessive sweating, did not feel too cold or too warm. And certainly, the feel of the jacket was softer and more comfortable than some of the Gore-Tex pro-shell jackets I have worn.

I actually really like the jacket. It wore great, looked great and performed great.

Second day of the Gore-Tex Snow Experience. I decided to leave my snowboard behind and try on a pair of ski's. Learning something new is always exciting and had a blast with great help from organisation guides. Who also took is on a short but very sweet climb to the summit of the Kitzsteinhorn. Amazing day! @goretexeu @goretexjp @goretexna #goretex #snow #sports #experience #snowsports #products #gear #learn #clothes #garments #ski #skiing #snowsports #snowboard #snowboarding #kaprun #sun #winterishere #winter #friends #newfriends #backtoschool #lessons @zellamseekaprun @kaprun

The icing on the cake was a talk by German climber and adventurer Stefan Glowacz. He had just come back from a three-month expedition to Greenland together with young German climber Phillip Hans, where he had set an ambition to travel to with “Fair Means” meaning trying to keep the ecological footprint of his expedition as low as possible.

With two fully electric cars, they drove in four days from the south of Germany to the north end of Scotland. There they boarded a small sailing boat that took them to the edge of unbearable seasickness as well as the west coast of Greenland. There they did a two-man eastbound trek with sleds across the snow and ice cap of Greenland. Most of the time hiking, portaging the sleds and a few happy and lucky times powered with kites.

Intense days in complete absence of any civilization .... will soon arrive at #Scoresbysund, Eastcoast #Greenland and finish the icecap crossing, part III of our #CoastToCoast Expedition. The last days were extremly cold, stormy .... lots of snow .... frostbites .... but: some highlight days with sun and good winds helped us to speed up .... kiting over bumpy sastrugi for hours was challenging for knees and legs as well 💪🏻. Fingers crossed for Skipper Wolf Kloss, Dani & Jan - #SantaMaria is stuck in #Tassilaq due to heavy storm ... #restdays ahead!! 🍀

The ultimate goal was to climb a wall on the east coast of Greenland, which, when they arrived and had made a day-long approach, turned out to be completely iced over. Even if their bodies hadn’t been worn out by weeks of hardship, there were no holds to find and it was impossible to climb.

In a way, there was kind of a relief, and when the Santa Maria, the boat that had brought them to Greenland’s east coast turned up, they were happy to board and head back to Scotland. Although many days of seasickness would follow once again.

What Stefan experience is just too much to fit into this short article. And you could see that he was still dealing with all the impressions and emotions of the expedition. I was touched by his openness, talking about the hardships, the fear they had felt in a tent on an ice-cap, a storm blowing outside with no hope of rescue in those conditions if anything went wrong. He de-romanticized the notion of these extreme adventures just a bit, which I found refreshing. No posturing as a caricature of a conquering adventurer, but sharing his experiences, good and bad as a real human being diving deep into himself and finding what power and strength he has to do what he has set out to do.

After his presentation I had a short talk with Stefan on the nature of adventure, which I will write something about later this year I think, but which really rang true; about how, in a day and age where all first ascents seem to have been done, and all corners of the earth seem to have been explored, the adventure within yourself is the next great adventure.

The tops you have to climb, the storms you have to weather, the depths you have to go through to find the view, or the experience that makes you breath deeper, that quiets your thoughts and makes your heart smile.

Last but, by all means not least, Stefan looked back on his idea of going on this expedition by fair means, in other words, trying to keep the ecological footprint of it, as low as possible. Going by electric car and sailing ship, and leaving no trace behind as they made their way through that great nature of Greenland. And having come home to find that the trash they had taken with them, was still quite a collection. Which made Stefan consider what he could do to minimize that as well. That is perhaps the mark of a great adventurer, that having come home, having hugged your friends and family, your eyes slowly turn to the next horizon.

Finally #backhome ... after more than 3 months! We brought home unique memories and of course the entire garbage, every piece of plastic, every single small bag or wrapping caused on our icecap-crossing in #greenland ... to at least - hopefully - finally dispose it in a "correct" way and to not leave any of our expedition waste on this fragile, pristine, unique, beautiful arctic island. Of course, this is not the solution to the big (#plasticwaste) problem ... We were part of it ... but it is a way to at least demonstrate our awarness concerning this sooo important topic. #15KilosOfWaste #CoastToCoast2018