As Exposed as it Gets: Epic Mountainbiking

I ran into this video again and was as amazed (if not more so) as I was the first time I saw it. It’s been on the interweb for six months now, but it’s nice to post something that blows your mind again and again once in a while.

If this guy were any more exposed he would need a parachute. To be honest, it’s not really my kind of mountainbiking, I prefer a bit more speed. It’s more trial biking than MTB, but you have to hand it to this guy, nerves of steel, brass balls and amazing coordination and incredible technical riding skills. Proper respect all the way. Epic mountainbiking.

Johannes Pistrol rides the Steinerne Rinne from Goinger Halt, July 2014. The upper section from the summit down to the upper rinne is relatively straight forward, albeit slightly exposed. The lower section contains the hardest and the most futuristic riding. Johannes didn’t clear all sections but this attempt is the most I have seen ridden so far. 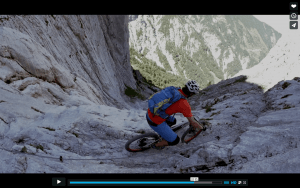 I only keep wondering: why the knee protectors? If he falls anywhere on that trail his knees will be the least of his problems ;-). If he does take a tumble, he’ll probably find his knees pressing painfully against the small of his back. Same for the helmet really, this is all or nothing mountainbiking as far as I can see. What I also keep wondering, as an avid filmer myself, is the positions the cameraman has wrung himself into to capture amazing shots. Insane. So kudo’s to both Johannes and Big Col (if he is indeed not only the uploader but also filmer of this insane edit.